What Is the Difference Between USB & Ethernet? 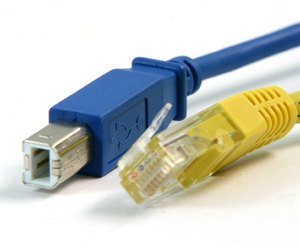 USB is compatible with plug and play devices. This means that when you plug in a USB device, the device's drivers will begin to install automatically. When you attach a device to your computer by Ethernet, you may have to install the drivers manually. If a CD came with your device, place it in the drive to install the software and configure the device. Some modems that connect by Ethernet require no drivers. However, your Internet Service Provider (ISP) will probably provide you with software to configure your system to connect to the Internet.

A USB cable has metal connectors on both ends. The type "A" connector is flat and broad. This end connects to your computer. Many computers have USB ports both on the front and on back. These can be identified by a trident symbol, which shows a medium-sized circle connected to three lines. One line ends in a square, one in a smaller circle and one in a triangle. The "B" connector connects to your device. This plug is keyed so that you can't insert it in your device the wrong way. Ethernet looks like a large telephone cable. It has a plastic tab on the end that will catch inside the plug when you insert it in back of your computer.

Ethernet is the best choice for connecting a broadband modem to your computer. This is because most broadband connections will function at speeds that are less than 30 Mbps. Fast Ethernet is more than adequate to handle these speeds. Ethernet is usually the best way to connect a local area network since it doesn't have to share resources with other devices.

Even if your router and access points have USB connections, Ethernet may still be a better option. USB bandwidth is shared between all the devices connected to your computer by USB ports. This is fine if you're connecting a printer, a digital camera and a scanner, since you probably won't be using them all simultaneously. If you use USB for your networking needs, you may find that your router or modem are competing with other peripherals for resources. Also, Ethernet connections are dedicated to network traffic. Ethernet cables of up to 328 feet can function optimally, while USB cables are typically limited to 6 feet.

How to Convert USB to Ethernet

Around The Home
Productivity
By: Maxwell Payne

Around The Home
Productivity
By: Michael Hintz

How to Connect a Laptop to a Modem

Around The Home
Productivity
By: Amanda C. Kooser

How to Connect Ethernet to USB

Around The Home
Productivity
By: Lucosi Fuller

How to Repair an Ethernet Port on a Laptop