What Is the Function of RAM in a Computer?

A computer's Random Access Memory stores data for short-term use. RAM works in conjunction with the hard drive, which takes care of long-term storage, to provide quick access to files that the computer is actively reading or writing. Unlike hard drive memory, however, program data stored in RAM is erased when you reboot the computer or when another program needs the space for its own use.

Hard drives can store vast numbers of files, but compared to other computer components, drives run very slowly. Accessing hard drive files -- especially when those files are scattered across the drive due to -- requires the drive to move its mechanical read/write head back and forth and to wait for the spinning platters to spin into the correct position. Even though drives spin at thousands of rotations per minute, this process causes a noticeable delay when reading files.

To lessen the slowdown, computers store files in RAM after the files are first read from the drive. RAM has no moving parts (and runs at a higher speed than even a ) so the files can load very quickly during subsequent uses.

In addition to storing files read from the hard drive, RAM also stores data that programs are actively using but that doesn't need to be saved permanently. By keeping this data in RAM, programs can work with it quickly, improving speed and responsiveness.

RAM plays a role in almost everything you do on your computer. Even though you don't interact with your system's RAM directly, it's working behind the scenes to speed up file access and provide temporary storage:

If RAM works so much faster than the hard drive, why not load all of the computer's data into RAM? One major reason: computers have far less RAM than drive space. As of publication, hard drive sizes range from a few hundred gigabytes in laptops to 10TB in high-end enterprise systems. Most home computers have between 1 and 4TB of drive space. On the other hand, most computers only have between 4 and 8GB of RAM, and even the enterprise edition of Windows 8 has a hard limit of 512GB of RAM. 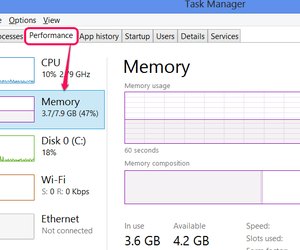 The Disadvantages of Fragmentation

Around The Home
Productivity
By: Michael Cox

How to Delete Windows Prefetch Files

Why Does My Hard Drive Run All the Time?

How to Speed up a Sluggish MacBook Pro

How to Make My Computer Run Faster