What Type of Material Is Used to Make a Memory Chip?

Memory chips are used to make RAM modules, graphics cards, and other computer components. Few manufacturers produce the actual memory chips. Most RAM module manufacturers buy chips from the chip makers, assemble components with the chips, and sell them with their own brand labeling. 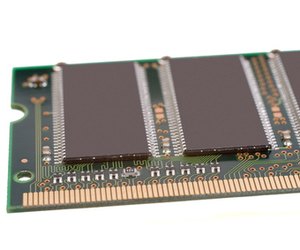 Memory chips are used on RAM modules and graphics cards.

Memory chips consist primarily of silicon, which is obtained from sand. The process of making sand into silicon involves melting, cutting, polishing and grinding. The silicon is pressed and cut into integrated circuits.

The silicon is made into an ingot, or single-crystal cylinder six to eight inches wide. The cylinder is cut into wafers that measure less than one-40th of an inch thick. These wafers are pressed into various integrated circuit parts with the aid of computers.

The circuit is coated with a layer of glass by exposing the silicon to temperatures of 900 degrees Celsius for an hour or longer. Afterward, the unit is coated in a nitride layer. A number of different textures are created in the circuits during this process.

The connecting pins or leads are added during a process called bonding. The pins are made of either gold or tin. These pins are used to electrically connect the chips to components they will comprise. Is There Gold Ink for the Laser or Inkjet Printer?

Around The Home
Productivity
By: Adam Smith

How to Fix a Chip in an LCD TV Screen

How to Determine the Identification of MOSFET

What Is Solvent Ink?

Around The Home
Productivity
By: Danielle Langberg