Why Is My Computer Making a Really Loud Fan Noise?

Unusually loud computer fan noise indicates a problem; it's frequently caused by a number of different factors. If you notice your fan sounding excessively loud, take note of which processes are running at the time and how long the fans run. Sometimes the cause is temporary, while other problems require more attention. 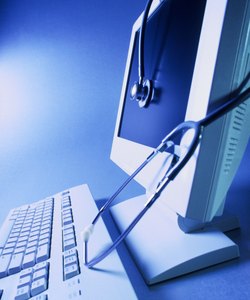 Your computer's fan may sound loud due to a number of reasons.

Processes that require intensive CPU usage cause an increase in heat, which causes the fans to run. Depending on how hard the CPU is running, the fans may rev up and run for longer periods of time than normal. The noise of the fan running may combine with the normal hum or whir of the hard drive as it accesses data, making it sound louder than it actually is.

Various factors cause a computer to overheat, including close proximity to an outside heat source and improper venting. The internal fans are designed specifically to prevent damage to the system from high temperatures; an overheating system requires the fans to run harder to keep up. The fans are running in an attempt to cool the system; the heat isn't dissipating fast enough, making them run harder and louder.

Sometimes a software conflict can cause your fans to perform incorrectly. They don't run at their full speed or turn off when the computer temperature falls. Fans with broken blades don't move the air effectively enough to dissipate the heat, requiring them to run harder and longer in an attempt to cool the computer.

What may sound like a very loud fan may actually be the sound of the fan vibrating against the computer tower's casing, or another part inside the computer. This amplifies the sound of a normal running fan, making it appear much louder. Check your fan's connections to make sure the fan is connected securely; ensure that it is not touching any other parts of the computer to cause a vibration.

How to Remove a Cooler Master CPU Fan

How to Fix a Broken Laptop Fan

Around The Home
Productivity
By: Cindy Paterson

How to Clean a Computer System Unit

Signs of a Bad Computer Fan

Around The Home
Productivity
By: James Bisson

What Are the Effects of Heat and Humidity on Personal Computers?