Category 3 (Cat-3) and Category 5 (Cat-5) cables are two of the most widely installed categories of data transmission cables under standards devised by the Electronic Industries Alliance (EIA) and the Telecommunications Industry Association (TIA). While similar in appearance and structure, Cat-3 and Cat-5 cables are very different in data transmission speeds. 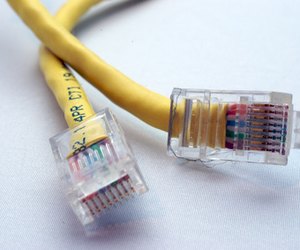 Cat-3 cable was introduced in the early 1990s and was a popular standard for use in early local area networks, or LANs. The Cat-5 cable replaced the Cat-3 standard for Ethernet usage in the mid-90s due to its abilities to transmit much higher data speeds. However, Cat-3 cable, which is one of the oldest cable standards used for data transmission, has outlived its younger sibling as a standard, due to its lower cost and the introduction of a transmission method that could make use of all four pairs of its internal wires.

Both Cat-3 and Cat-5 cables are comprised of four twisted pair, for a total of eight 24- gauge copper wires. Both cable standards are unshielded, and both have an outer sheath stamped as certified Cat-3 or Cat-5. Electronic noise that could be experienced along a length of cable carrying such high rates of data transmission is reduced by very precise twisting of the wire pairs. For example, in a Cat-5 cable, the four twisted pairs of wire have six twists per every five centimeters.

Cat-3 cable can carry data speeds of up to 10 megabits per second (mbps), while Cat-5 cable supports speeds of 100 mbps or higher. Cat-5 cable can also be used for longer runs, up to 300 feet (100 meters) between computers or switches. Although it may resemble it's faster cousin, Cat-3 cable should only be used for lower speed data transmissions; it can cause errors if it is used in installations requiring faster speeds.

Cat-3 cable is still used in PBX phone systems and Voice Over Internet Protocol (VoIP) installations, along with the slower 10Base-T Ethernet installations. Cat-5 cable is widely used for 10/100Base-T Internet and analog voice installations. Even though it is newer than Cat-3, Cat-5 is no longer a standard, having been replaced by the Cat-5e specification that supports 1000 megabits, or gigabit Ethernet, and long cable runs of up to 1,150 feet (350 meters).

Cat-3 saw a resurgence when the 100BaseT-4 standard was devised. The slower 10Base-T Ethernet standard that runs over Cat-3 cable uses only two pair of the available four twisted pair. The 100BaseT-4 standard, which achieves speeds of up to 100 mbps, uses all four pairs of wires within a Cat-3 cable. This allowed businesses that were already wired for Cat-3 to retain their existing wiring, but upgrade to the higher speeds. Cat-3 cable is still popular because it is much less expensive than the Cat-5 and other cable standards rated for higher speeds.

What Is the Difference Between Cat3 & Cat5?

Around The Home
Productivity
By: Jay Kotak

A CAT 5 vs. a Coaxial Cable

Around The Home
Entertainment
By: Chris Davis-Falco

Around The Home
Productivity
By: Stuart Robertson

Around The Home
Productivity
By: Charlie Higgins