What Is UTP Cable?

Unshielded Twisted Pair cable is low-cost network cable built with a pair of insulated conductors twisted together and covered with a plastic jacket for protection. It is called unshielded because it has no additional foil wrap, or shield, which is added to cables when electromagnetic shielding is required. UTP cable is used extensively in local area networks, or LANs. 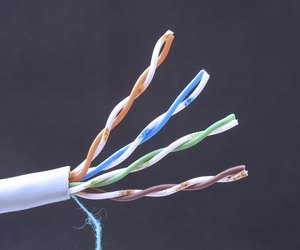 UTP cable is a group if single conductors wrapped around each other inside an insulated jacket.
credit: Georgios Alexandris/iStock/Getty Images

Alexander Graham Bell was the first person to make a UTP cable by simply twisting two wires together. The basic design has changed little since 1881, and is still a pair of single conductors wrapped around each other inside an insulated jacket. Some cables include up to four pairs of twisted cable. There's no foil wrap shielding and no braided shield screen, so this kind of cable is more susceptible to interference than a shielded twisted pair.

Electrical signals carried through any conductor can create electromagnetic fields. Two or more electromagnetic fields in close proximity can interact with each other, which usually means loss of data or signal strength. Losing data in a computer network can result in a variety of problems. Shielded twisted pair cable is an option when interference is an issue.

Shielded and unshielded twisted pair cables carry several designations. Each type of cable has different electrical characteristics, varies in its ability to shield a signal, and is appropriate for different environments. Typical cable designations include UTP or U/UTP, the basic two-conductor without foil or braid shield; STP or U/FTP, which includes a foil shield under the jacket; and FTP or F/UTP, which includes a braided screen for additional protection. For some special environments, there are also heavier cable configurations with more shielding.

There are different categories of cable, with CAT1 through CAT5, CAT5E and CAT6 being the most common. CAT1 is telephone wire and is not suitable for LAN communication. CAT2 through CAT5 are suitable for telephone or network communication, and differ in their ability to transmit high-speed data. CAT2 can support up to 4 Mbps, and CAT3 can go to 10 Mbps. CAT5 cable should be used for any high data speeds, up to 100 Mbps. CAT3, CAT4 and CAT5 carry more wires inside the jacket, with four pairs of twisted wire. In addition to having more conductors, conductors in a CAT5 cable are twisted more tightly together than in CAT4 and CAT3, which helps to prevent unwanted interference. CAT6 wire physically separates all four pairs of twisted conductors, further reducing the chance of interference, which makes it suitable for gigabit data speeds.

CAT5E cable includes a variety of engineering improvements that make it superior in all respects to CAT5 cable. CAT5E cable is less susceptible to crosstalk, or interference between conductors, is rated at 350 MHz, can support gigabit Ethernet speeds, and has a tougher PVC jacket. The tougher jacket makes CAT5E cable less likely to be damaged during installation. Except for some networks that specifically call for CAT5 cable, CAT5E is suitable for all applications.

Around The Home
Entertainment
By: Sam N. Austin

What Are the Three Advantages of the STP Cable?

What Is the Difference Between Gray & Blue Ethernet Cables?

How to Splice Ethernet Cables