What Causes Pixelation on Cable TV?

Any television that uses pixels to produce images on the screen is vulnerable to pixelation. This problem -- which applies to both sets using liquid crystal display or plasma technology — appears as a series of monochromatic tiles as opposed to the smooth edges of images on your screen. Older television sets, poor quality equipment, issues at the source and outside interference all cause pixelation on cable TV. 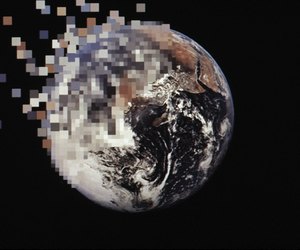 The boxy tiles at the top left of this image are a prime example of pixelation.

An older or low-end LCD or plasma television set is vulnerable to pixelation thanks to your TV's refresh rate. Older televisions typically have a refresh rate of 60Hz, which means your screen displays 60 frames every second. Older sets may gradually lose the ability to process images at this speed, resulting in pixelation. Newer televisions or high-end models are less susceptible to this pixelation -- even if they share the same refresh rate of 60Hz -- because they are less run down and better able to keep pace with the digital data sent to them.

Cable TV arrives at your home through a variety of cables. These cables stretch from the source at your cable company all the way to your neighborhood and ultimately into your home. RG-6 and RG-59 are the most common residential-grade coaxial cables used to bring a cable television signal from a neighborhood cable box into your home. Problems within a cable -- such as fraying, exposure to the elements or crimping -- damage the signal as it travels from the cable box to your set, leading to problems ranging from pixelation to poor audio to a choppy pixel. Additionally, HDMI cables -- which are used to transfer a high definition signal from a cable receiver in your home to a television set -- are vulnerable to the same types of damage and, hence, pixel distortion.

Problems At The Source

Pixelation on your cable television may have nothing to do with your television set or the cables within your home. In some cases, the problem began at the source. Television stations often use pixelation as a graphic tool to distort images intentionally, such as protecting a crime victim's identity during an interview. In other cases, the pixelation is unintentional, but still generated at the studio level or in the transmission process. For example, when a live news broadcast suddenly pixelates, the cause may be damaged cables attached to the cameras filming the show. Problems within your cable company are also to blame; try resetting your in-house cable receiver box to rule out any problems within your system.

Weather, nearby appliances and competing signals are all potential causes of pixelation. Thunderstorms are one major source of pixelation, especially if they include lightning. The electric current generated by lightning can interfere with your cable TV signal, resulting in periods of pixelation; however, once the storm passes, the problems should abate. Appliances and other electronic devices located near your television or cable receiver also emit radio waves that can interfere with your television signal, resulting in pixelation, ghosting or blurred images. Other times, interference happens at the source; if two local TV stations have satellite or microwave live trucks set up next to one another on location, the electric waves emitted from one can compete with the other, causing one or both to generate a pixelated image.

Why Does My Digital Cable Keep Pausing?

What Causes Tiling on Cable TV?

What Are the Causes of Bad Digital TV Signals?

Around The Home
Entertainment
By: Brent Watkins

What Causes Jerky Movements on My LCD TV?