Difference Between Echo and Reverberation

Echo and reverberation (or reverb) refers to the effect of sounds reflected off solid objects, such as walls or ceilings in a theater or rocks in a valley. They are differentiated by the length of time between the initial sound and the reflected repetition. 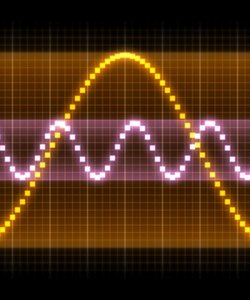 Sound moves in waves and can be reflected back to create echo and reverberation.

Sound is created when objects vibrate, transferring energy in waves. The more frequent the waves repeat, the higher the pitch of the sound; the more energy transmitted in the waves, the louder the sound. As sound waves travel, solid objects will be encountered, which will not absorb the energy but reflect it instead. The sound is then heard at the source delayed by the time required for sound to travel the distance from its source to the reflecting object and back to the source.

If this distance is short, such as in a room or theater, the sound will be reflected back to the source in less than one-tenth of a second. This effect is reverberation. Because there is such a small delay in the sound repetition, sometimes only a few milliseconds, reverberation is often perceived by a listener as adding fullness to the original sound.

Reverberation will often be added to recorded music to better simulate the sound of a live performance, or to enhance the tone by making a thin sound fuller.

Everyone has had the experience of calling out in a valley or between large buildings and hearing our voices repeated back to us. When reflected sound travels a greater distance, such as a river valley, and takes more than one-tenth second to return, it is referred to as an echo.

Echo does not add to the original sound as reverberation does, but is perceived as a distinct repetition of the sound, usually slightly fainter than the original. The sound is weaker because of the energy lost as the sound waves travel the greater distance. This is referred to as decay. Echo can be measured by the time lapse between repetitions, strength of the repetitions (i.e., how loud the repetition is) and the decay of the sound.

Allowing for Reverberation in Performance Spaces

Musical venues are often designed to use reverberation to add fullness to performances. Concert halls, theaters and auditoriums will be designed with careful placement of sound-absorbing and sound-reflecting materials in order to achieve the most beneficial reverberation effects. Sound absorbing materials, such as rubber foam panels, thick fabric curtains and chairs, can often be adjusted to improve the acoustical (sound) properties of venues. Sound reflecting areas, most often walls and ceilings, can be covered by absorbing materials to reduce or control sound reflections. Similarly, large outdoor performance spaces are designed or chosen for favorable echo effects.

Echo and Reverberation as Sound Effects

Because echo and reverberation add depth and texture to sounds, both are often used as special effects in musical performance. Musicians can use portable devices that mimic the delayed sound to create the same effect. The devices can be adjusted for delay (the amount of time between the initial sound and the repetition), the volume level of the repeated sound and the number of times the sound is repeated.

Early recording studios used large rooms with uncovered walls to create reverb effects in recordings. Echo effects were first achieved by using tape recorders to capture the original sound on a tape loop, then repeat it at an interval determined by the length of the loop.

The Relationship Between Hertz and Decibels

Around The Home
Entertainment
By: Eric Blankenburg

How to Make a Robot Voice in Audacity

Around The Home
Productivity
By: Charles Clay

The Effects of Magnets on Speakers

Around The Home
Entertainment
By: Shannon Johnson

Around The Home
Entertainment
By: Dan Seitz