High Frequency and Very High Frequencies are radio waves. They are part of the electromagnetic spectrum, and are commonly referred to as Short Wave radio (for HF waves) and Frequency Modulated (for VHF waves), also known as "FM" radio. Both radio bands are used in the broadcast of commercial radio transmissions. VHF radio waves are also used for broadcasting television signals. 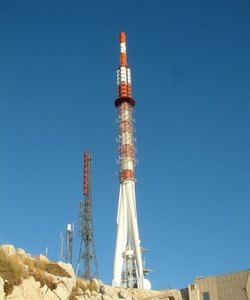 The Electromagnetic spectrum is divided into different waves of charged photons oscillating at specific frequencies. The entire EM spectrum of radiation (in order of increasing energy) consists of radio waves, microwaves, infrared radiation, visible light, ultraviolet radiation, X-rays, and gamma rays. Radio waves themselves can be subdivided into different frequencies, from ultra-low to extremely high. The energy characteristics of electromagnetic radiation can be either as waves or particles.

A radio wave is an electromagnetic transmission composed of electric and magnetic fields vibrating together. These two fields are aligned in a perpendicular arrangement and travel as a wave. The energy in the wave moves back and forth between the electric and the magnetic fields. The frequency at which a radio wave cycles per second is measured in units of "hertz." Radio signals can either be omnidirectional and propagate outward in a spherical shape, or they can be unidirectional and radiate outward as a focused beam.

High Frequency radio waves vibrate between 3 and 30 megahertz. This is also known as the Short Wave radio band, and this frequency is used for ham, CB and commercially broadcast radio. Short wave broadcasts often have news-oriented, political or religious content. HF waves can refract off the earth's ionosphere (a layer of charged particles in the atmosphere) and redirect to a desired location on the ground. In this way, short wave radio signals can be targeted to a geographical region.

VHF radio waves on the 30 to 300 megahertz range are also known as "frequency modulated" or FM waves, and are used for commercial radio and television broadcast. VHF signals can carry a higher amount of information, which is why the signal is clearer. FM waves are not refracted by the ionosphere. A disadvantage to FM is that signals travel in a straight line. Transmitters and receivers therefore must have a line of sight; otherwise, signals will eventually travel into space due to the curvature of the earth.

Radio wave propagation can be affected by a number of environmental factors, the most common being geographical obstacles like mountains and bodies of water. VHF (FM) signals are more affected by atmospheric disturbances such as fog or clouds than HF (short wave) signals. HF radio waves, however, are subject to refraction (or bending) by the ionosphere, whereas VHF waves are not. Because VHF waves have a higher frequency and a more directional focus, transmitting antennas must be placed on a higher elevation. This is not necessary for HF transmitters, as they utilize ionospheric refraction to direct their signals.

Around The Home
Entertainment
By: Drew Lichtenstein

Around The Home
Entertainment
By: AlanFaeorin-Cruich

The Difference Between Baseband & Passband

Around The Home
Entertainment
By: Simon Slayford