Radio communication, first developed at the turn of the 20th century, remains a significant part of the technology landscape despite decades of innovation and scientific breakthroughs. Radios work by transmitting and receiving electromagnetic waves that move invisibly at the speed of light, carrying music and speech in a coded form that depends on the type of radio used. Over the decades, radio has evolved into many different types, each of which fulfills different needs. 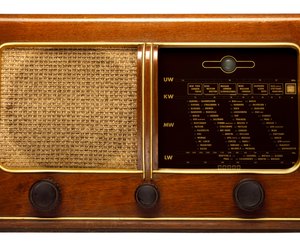 In use for more than 100 years, radio continues to be a popular communications medium.
credit: mehmet akgul/iStock/Getty Images

Amplitude modulation, or AM radio, is one of the oldest forms of wireless broadcasting. With AM, an audio signal rapidly modifies the strength of radio waves in a process called modulation; an AM receiver decodes the modulation back into sound. With the introduction of the transistor in the 1960s, pocket-sized AM radios became a reality for the first time. Although AM's coding scheme is simple, its sound quality is only fair, and it is vulnerable to electrical noise. FM, which was developed in the 1930s, relies on the modulation of the radio signal's frequency and not its strength. The higher radio frequencies used for FM as well as the modulation scheme give it much better sound quality with less noise than AM.

Shortwave radio lies in a range of frequencies from 1.7 to 30 megahertz, just above the AM radio band in the U.S. Because of the way its frequencies interact with the Earth's ionosphere, shortwave broadcasts can travel thousands of miles -- under some circumstances, listeners can tune in anywhere on Earth. Government and commercial stations broadcast on shortwave frequencies to provide news, information and other content. For example, the U.S. government runs WWV, a station that gives accurate time information, at 2.5, 5, 10, 15 and 20 MHz.

One of the newest forms of broadcasting, satellite radio is a commercial, subscription-based service that uses a network of satellites to transmit signals over wide areas. Unlike traditional AM and FM broadcasts, satellite radio is digitally encoded, requiring a special receiver. Even with the receiver, you cannot tune in unless you have a paid subscription; a computer chip in the receiver locks out any channels not paid for. Advantages of satellite radio include good sound quality, nationwide coverage and access to material that sidesteps the Federal Communications Commission's ban on profanity.

An amateur or "ham" radio operator broadcasts and receives signals over a restricted set of frequencies set aside by the FCC; ham radio requires special training, licensing and equipment. As with shortwave, ham radio broadcasts can travel thousands of miles depending on the time of day and other conditions. For many, ham radio serves as an interesting and entertaining hobby, as operators learn practical radio skills and form friendships with operators in other countries. In times of natural disaster, local communications may be knocked out; ham operators are known to step in to pass along life-saving information.

A walkie-talkie is a portable, handheld device that sends and receives radio signals, usually within a range of about a mile. Walkie-talkies are used by two or more people to communicate in situations where cell phone service is poor or unavailable, such as in remote locations or in buildings. Because walkie-talkies have low power and short range, you don't need a special license to operate them; they interfere little with other radio signals.