Both satellite and ground-based transmissions can use microwaves, which formally are defined as electromagnetic radiation in the wavelength range 0.3 to 0.001 meters, with a frequency between 100 megahertz and 30 gigahertz. This means the waves fall in the spectrum normally used for radar. But both terrestrial and satellite-based microwave transmissions conform to the same physical conditions. 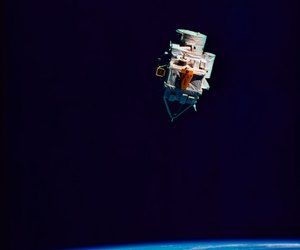 The World Administrative Radio Congress, WARC, which is the body in the International Telecommunications Union who regulates the use of radio spectrum, has set off two frequency bands for satellite communications. The C-band uses frequencies between 3.7 and 4.2 GHz, and from 5.9 to 6.4 GHz. The Ku-band satellites use frequencies between 11 and 12 GHz. Both types of communications require ground-based receivers to have a parabolic antenna to receive the signal. The antenna also has to be directed toward the satellite so that it focuses the parabola on the satellite transmission.

Radio, including microwaves, is a form of energy transmission. Energy transmission at frequencies and wavelengths that are defined as microwaves tend to be absorbed by water molecules. This is why a microwave oven works. For microwave transmission, the water molecules in the atmosphere absorb the transmitted energy. The effect required for transmission is comparatively low for the amount of data transmitted because of the short distances afforded by the line-of-sight requirement. This is also true for satellites. A satellite can transmit at a relatively low effect, since there is nothing between it and the antenna.

How to Make Homemade WiFi Antennas