Antennae are fascinating tools that can be used to explore the reaches of space through receiving wavelengths. Most commonly, however, antennae are used in the home to pick up and improve a television or radio signal. The size, shape and placement, along with the material it is constructed from, affect how well the antenna will perform. 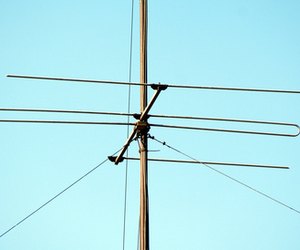 Antenna come in all shapes and sizes.

Metal coat hangers, although not the "best" material, are commonly used to pick up television wavelengths and are one of the cheapest means to do so. Make Television has addressed the poor picture quality that stand-alone coat hanger antennae produce, by using the designs of Doyt Hoverman, an engineer of the 1960s. By taking two or more coat hangers and some wire, an antenna can be constructed in a criss-cross pattern that is capable of picking up, not only analog signals, but also the sensitive UHF range used by most digital television transmissions.

Lightweight and cheap, aluminium is one of the best materials with which to make a television antenna. Aluminium can be used in the form of foil, a thin sheet of reflective and flexible metal, or as sturdier mesh allowing debris to fall through. Aluminium mesh is often used for outdoor antennae because it is stronger and able to withstand the elements better. Its ability to allow debris to fall through it means that any debris that would otherwise be caught in the antenna does not affect the picture quality.

How to Build a Copper Wire Antenna

How to Tell the Difference Between a UHF & a VHF Antenna

How to Add Tin Foil to Rabbit Ears

Around The Home
Entertainment
By: Jonra Springs

How to Make Homemade WiFi Antennas

Around The Home
Entertainment
By: Martin Wolfson