Latency is also known as lag and delay. It is the time it takes for a signal to get from transmitter to receiver. The definition of latency varies. Some term it as the time taken for a round trip from transmitter to receiver and back again. Latency is a particularly big issue with Voice over Internet Protocol applications (Internet telephony). Ping is a common network utility that measures latency. 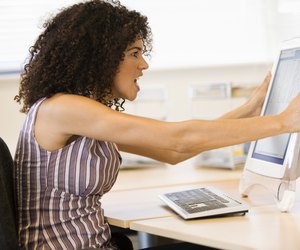 "Latency" means "delay" and it is annoying.

Apart from distance, the main causes of latency are network congestion, buffering and packet loss. Router delay results from more traffic arriving at the router than the router is capable of passing through. Data travels over networks in a structure called a packet. Packets get buffered and backed up while the router works at its own speed to try to clear the backlog. Delay will grow if the router has a large buffer. Smaller buffers do not eradicate router delay, they cause dropped packets. Dropped packet cause even more delay, as the sending computer has to be notified of the failure and retransmit the packet. Network managers plan for average throughput and install routers with slightly more capacity than that figure. The belief is that the traffic peaks that cause router delay will soon be balanced by a trough in demand. Devices passing data over networks might also buffer data for security inspection. The receiving computer often buffers data so it can deliver out-of-sequence packets in the right order.

Every computer connected to a network has the ping utility available at the command line. The program sends out a number of tests packets to a ping server at the given destination. The receiving ping immediately bounces back the test packets. Ping measures the arriving packets, reporting on each arrival. At the end of the run it summarizes the results of the session.

Ping reports a summary of two key factors: minimum, maximum and average round trip time and the number of packets lost. To ease the calculation of percentages, a ping run of 100 transmissions is the best measure.

Interactive applications like VoIP and video conferencing are seriously affected by latency. Online gaming and multimedia streaming services are unworkable if there is too much latency on the connection.

How to Check for Internet Interruptions

How to Calculate Network Throughput

Around The Home
Productivity
By: Jackson Lewis

How to Read a Traceroute

Around The Home
Productivity
By: Faizah Imani