Phones and tablets are capable devices, but full-blown computers still have a big advantage when it comes to upgradeability. With laptops and especially desktop or tower computers, you can add new capabilities or upgrade the existing hardware, usually by installing a card in one of the expansion slots. In modern computers, those slots follow a standard called PCI Express (PCIe). Slots are classed as X1 through to X16 and X32, and the differences between them come down to performance. 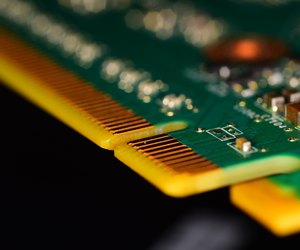 Difference Between PCI and PCIe

PCI Express is an upgraded version of an older standard, the Peripheral Component Interconnect (PCI) slot. Like PCI, PCI Express is a way to attach add-ons and upgrades – peripheral devices, in industry terms – to your computer. The difference between PCI and PCIe, as the "express" part of the name tells you, is that PCIe provides a much faster connection. The older PCI slots were fine for things like network cards and soundboards, but they were too slow for more demanding devices like graphics cards. A PCI motherboard had to provide separate expansion slots for those using different standards, like the Accelerated Graphics Port or AGP. Having two different kinds of expansion slots made no practical sense, and the industry created PCIe so both types of cards can use the same slot.

Stay in Your Lane

PCIe cards come in a bunch of different versions, described as PCIe X1, X4, X16 and so on, all the way up to X32. The difference between them is how wide a path they provide for data to go to and from the board. Those paths are described as "lanes," and that's what the number after the X means. It's a pretty good analogy because if you think of the boards in terms of roads, it's easy to understand the difference. Like a little country road, a PCIe X1 card has a single lane for its traffic – in this case, computer data – to travel. An X4 card has four lanes, so it can move four times the data on each tick of the system clock. An X32 card has 32 lanes, so it's capable of moving massive quantities of information at a time. Manufacturers choose an appropriate number of lanes for the card they're building.

If you're designing a PCIe board, you need to balance function against cost. Every lane you add increases the complexity and cost of the card as well as its performance, so you want to build the card with enough performance to do the job but no more than that. If you're building a card that adds another four or five USB ports to the computer, for example, a PCIe X1 is fine because that's not a demanding job. A high-end video card marketed at gamers needs all the performance it can get, so you'd make that an X16 or even an X32 card to take full advantage of the technology. You wouldn't mind the cost, in this case, because it's a premium product, and you can charge a premium price.

The Slots Are the Same

The expansion slots in your computer can take any PCIe card up to their designed maximum, which is one of the smart things about this standard. If your computer is built with X16 slots, for example, each of those slots can take any card up to and including an X16. If you look at the slot, you'll see that it's divided into a short front section and a longer second section. The cards follow the same format, with a small first section, a gap, and then the main section of the connector. That first part is the same size on all PCIe cards, and then the second section is longer or shorter depending how many lanes it has. An X1 card takes up just one end of the whole PCIe slot and uses a few of its data path connections. An X16 card takes up an entire X16 slot and uses all of its data connections.

There's More to Speed Than Bandwidth

All things being equal, an X4 card gives higher performance than an X1, an X16 outperforms an X8, and so on. Things aren't always equal, though, Each version of the PCIe standard increases the amount of data a card can theoretically transfer on a given tick of the system clock. Version 1 of the specification supported transfers of up to 250 MB per second in an X1 slot or up to 4,000 MB/s in an X16 slot. PCI Express 3.0 raised those numbers to 985 MB/s for an X1 card and 15,760 MB/S for an X16 card, and PCIe 4.0 roughly doubles those numbers again. An X8 card in a computer that supports PCIe 3.0 can give performance that's almost identical to an X16 card using the PCIe 2 spec.

There's a further complication, as well. To keep costs down, manufacturers might produce a motherboard with slots that are the full X16 in size and data path, but only operate them at the X8 speed. You'll see that referred to on spec sheets or online reviews as "X16@X8," or a similar combination of numbers, with the first number showing the card's data lanes and the second number showing the actual operating speed. If you're looking for maximum performance, you want those numbers to match.

Around The Home
Productivity
By: Elizabeth Falwell

Around The Home
Productivity
By: Casey Labine

How to Determine Graphics Card Compatibility With a Motherboard

Around The Home
Productivity
By: James Wright