CRT (cathode ray tube) monitors used to be the primary devices for computer use. Within the last decade or so, the majority of daily computer users have upgraded to LCD monitors, and manufacturers have slowly ceased production of CRTs. Although the use of CRT technology has quickly declined since the introduction of LCDs, CRTs are still unbeatable in certain ways. 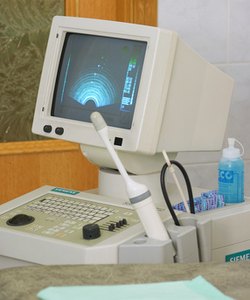 CRT monitors were previously a popular convention of modern technology.

The most obvious feature of the CRT monitor is its large size. This is an unavoidable attribute of all CRT monitors, due to the limitations of the technology they use. Along with its large size comes heavy weight, according to PC Tech Guide. This is mainly due to the glass used both on the surface of the screen and inside of the monitor itself. Flat-panel LCDs of the same screen size can be a fraction of the weight.

The contrast provided by CRTs is considered to be better than with LCDs. CRTs have much better contrast ratios and are able to produce much deeper black levels, according to wisegeek.com. This basically means there are much more visible details in dark images. CRT monitors, however, fall short of LCD technology when it comes to creating bright white levels.

CRT technology has become almost completely obsolete. Most manufacturers have ceased production of CRT monitors, so if you want one, you most likely have to buy it secondhand. The good news is that CRT monitors are quite inexpensive. If you look at ads on craigslist.com, you can often find them for free from home users who have decided to upgrade to an LCD. Over the long run though, it may be cheaper to go with an LCD. CRTs use much more energy per hour of use, according to PC Tech Guide.

One final consideration is that when CRT production was popular, most media content was in the 4:3 letterbox format -- more square-shaped. Most media content today is widescreen. When viewing widescreen content on a 4:3 monitor, you will have black bars on top and bottom of the screen. This means that you won't be able to effectively use all the screen space. LCD monitors produced today all come in widescreen, which means either smaller bars or no bars at all.

How to Zoom Out on a Vizio