In recent years LCD, or liquid crystal displays, have become the standard for televisions and computer monitors, replacing bulky CRT sets and giving users access to high definition images with excellent color, contrast and brightness. However, not all LCD monitors are alike. In particular, WLED screens have some important differences that set them apart. 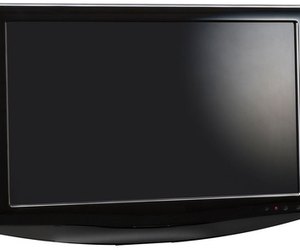 WLED stands for white light-emitting diode. This technology is a common source of backlighting for digital monitors, and display manufacturers use the terms WLED and LED interchangeably. LCD, on the other hand, refers to liquid crystal displays, which is a category that includes all types of LCD monitors and televisions, including those that use WLED backlighting. LCD screens that don't employ WLED technology use CCFL, or cold cathode fluorescent lamps, instead. However, these displays always carry the name LCD.

In both CCFL and WLED-backlit screens, the actual operation is much the same. LCD pixels do not actually emit any light. Instead, they act as shutters, blocking out a portion of the spectrum of light produced by the backlight. Viewers see only the color that the pixel allows to show through, although the backlight is always producing a pure white light.

Another key advantage of WLED backlighting is that it is more energy efficient than the conventional LCD screen standard of CCFL. Backlighting a monitor requires large amounts of energy to produce light, most of which is filtered out before it reaches the viewers' eyes. Even when the screen displays complete whiteness, about 95 percent of the backlight's output is being blocked by the pixels. This means that even modest energy savings from WLEDs add up to less electricity usage and lower operating cost.

WLED monitors have several other advantages over LCD monitors to justify their cost. WLEC monitors begin to display an image instantly, as soon as they receive power. LCD screens using CCFL backlights come on more slowly, gradually rising to full brightness. WLED monitors are also brighter in general, providing more vivid colors and higher contrast ratios. They can also be thinner, as LEDs take up less space than a CCFL backlight in a conventional LCD monitor.

The Advantages of LCD Monitors Over Traditional CRT Monitors