What Is a Better Monitor: LED or HD?

Acronyms are common in the television marketplace, which can become confusing to consumers who are trying to determine what qualities to look for in a new TV. Two such acronyms commonly attached to flat-screen TVs are LED and HD, which do not necessarily refer to two different types of TV. 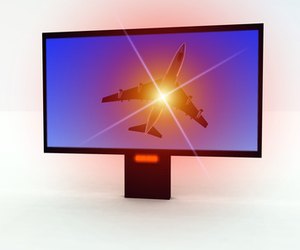 HDTVs that display up to 1080p video are known as "full HD."

LED is short for light-emitting diodes, a specific type of technology used to create the backlight for some LCD (liquid crystal display) flat-screen TVs. HD stands for high definition, which is a designation for broadcasters as well as TV manufacturers denoting a picture resolution of either 720 or 1,080 vertical lines, which can be either progressive-scan or interlaced, creating terms such as 720p and 1080i.

The HD designation can be ascribed to a TV of any type that can display that level of resolution, whether it be LCD (with or without LED backlight), plasma or other, such as DLP (digital light processing), and the video quality of HDTVs will be superior to that of standard definition TVs. Because LED backlighting is only used in HDTVs, there is no issue on whether an HD or non-HD LED TV would be a better-quality monitor.

LCD TVs that feature LED backlighting can present an improvement over those without in that the LED technology allows for thinner screens and brighter whites, and those with local dimming enable you to adjust the amount of backlight in specific areas of the screen. Also, models with colored LEDs will deliver sharper color accuracy than other LCD TVs. Still, a 1080p HDTV of any type can deliver a sharper overall picture than a 720p HDTV using LED lighting.

How to Connect a Sony Vaio to a TV via HDMI

Around The Home
Productivity
By: Richard Schupp

How to Troubleshoot a Flashing Sony Wega