The precise terms for specific television faults vary from source to source, partly because TV manufacturers don't have much incentive to talk about faults in their products. Banding, also called false contouring or posterization, refers to unrealistic solid strips of color in areas that should display a smooth transition. 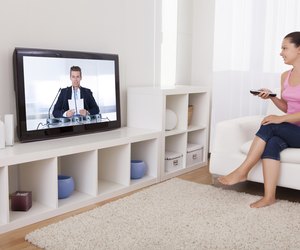 A woman configures the settings on her new flatscreen television
credit: AndreyPopov/iStock/Getty Images

Banding affects TV images when they display a gradual change between shades of a single color. One of the clearest examples of this is footage of the sky in which the blue goes from light blue at the bottom to dark blue at the top. When banding occurs, the transition isn't smooth and that section of the picture appears to be broken into bands, each of a solid shade. These bands create a jarring border between the shades of blue instead of a smooth transition.

The most common explanation for banding lies in the way individual TV sets combine red, green and blue light in different proportions to produce colors. In some cases, the problem may be that the source material contains more shades of color than the screen can handle. In other cases, the TV may use techniques to create a wider range of shades of colors. Sometimes, this involves creating shades beyond the colors contained in the source material; such techniques aren't always effective. In both cases, the result is that a visibly large band of pixels that ideally would be in different shades is instead displayed in strips of uniform solid colors.

Look out for mentions of banding in product reviews and check screens in showrooms for signs of banding. Different sets display different levels of banding; whether it is noticeable depends on both the content and production of the footage you watch. Check the color section of the settings menu on your screen to see if any adjustments reduce or remove banding. Your set may offer a special setting that specifically aims to remove banding: Some Sony sets have a setting called Smooth Gradation, for example. Alternatively, try switching off special features on your television that relate to the handling of color; they could be causing or worsening the banding.

The term "banding" is sometimes used for a different problem that is also known as "jail bars" or "screen uniformity problems." In this case, some parts of the screen are lighter than others, regardless of the intended image. Sometimes this disparity is so stark it appears as distinct vertical lines. The problem is most commonly associated with LED sets. These use light-emitting diodes to produce the light that passes through liquid crystals to product an image. Some sets don't do a good enough job of dispersing the light from the LEDs evenly across the screen. As well as checking reviews, you can use specialist test disks to check for problems such as jail bars.

What Is Vizio CTI?

Around The Home
Entertainment
By: Matt Skaggs

How to Troubleshoot a Sony Trinitron TV

What Causes Color Problems on TVs?

How to Troubleshoot a Hitachi LCD TV