How Does a Computer Monitor Work?

A monitor is the visual output device connected to the computer tower. It displays picture and images in real time, allowing one to interact with the computer, activating and running its programs at will. There are two primary types of computer monitors, each with their own advantages over the other. A Cathode Ray Tube monitor, or CRT, is cheaper, more durable and able to withstand being damaged and remain functional, and has a better gradation between colors. A Liquid Crystal Display monitor, or LCD, is lighter and more compact, requires less electricity to power, and tends to have better resolution. 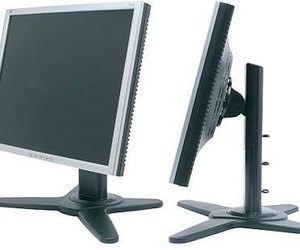 How Does a Computer Monitor Work?

What is a Computer Monitor?

A CRT has a large vacuum tube in the back, with a cathode containing a heated filament pointing forward, toward the viewer. This heated filament becomes an electron gun, firing off streams of electrons in response to the visual signal it receives from the computer. Ahead of the cathode, ringing it, is a set of electromagnets which activate in response to the same signal. These magnets alter the course of the electron stream, aiming it. At the front of the monitor is a glass plate. On the back of this plate are millions of tiny phosphor dots. These dots are combined into groups of three--one red, one blue and one green. These groups are called pixels. When the electron stream touches the pixels, the correct combination of the phosphor dots will light up and different intensities to create any color in the spectrum. The stream passes over the entire monitor at a rate of 50 to 100 times per second to create the continuous interactive image that we see.

An LCD monitor is composed of two specially treated plates of polarized glass pressed together. Between these plates is a liquid crystal material which responds to an electrical current by allowing different wavelengths of light through at various points across its surface. Instead of creating points of light, the entire premise of an LCD monitor is to block out the majority of light, to allow only specific wavelengths, interpreted as colors by our brains, through the front of the monitor. A backlight emits a continuous stream of light covering the entire back of the monitor, at all visible wavelengths. The electrical current created by the visual signal sent from the computer causes the liquid crystal material to block out different wavelengths of light across its face to create the general shapes and colors of an image. Behind the monitor's face but in front of the liquid crystal is an enclosed matrix of transistors connected to pixels on the screen's face. This matrix is so thin that it appears to be transparent. But when a varying current runs through it, the same current as the one manipulating the liquid crystal, it causes certain pixels to light up, adding definition to the overall color passing through from the backlight.

Main Parts of a TV

Around The Home
Entertainment
By: Brian Heuberger

What Are the Main Parts of a Television?

Functions of a Cathode Ray Tube

Who Invented the Black Light?

Around The Home
Entertainment
By: Michael David Velardo

How to Calibrate an Infrared Temperature Gun