The first microchip was invented in 1974. Since that time, processing capabilities continue to increase at an exponential rate. Microchips are the brains of every electronic device in existence. From watches, to calculators, to satellites, to computers, these small chips account for the conveniences that make make so many tasks easier. Microchips are integrated circuits that have been etched onto silicon chips, or wafers. The integrated circuits transfer electric currents, or signals, which are then converted into instructions by a receiving device. The silicon content of the chip, together with wires and transistors, create a highly conducive environment for transferring electricity. 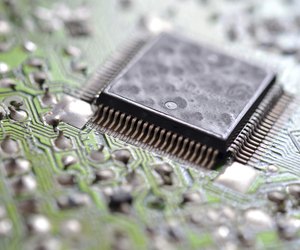 Manufacturers use micro chips in thousands of products ranging from cellphones to computers
credit: Ensup/iStock/Getty Images

There are a number of different ways to build a microchip. How it is built depends on the chip's intended use. In the case of a personal computer, the main ingredient for most chips is silicon. Silicon, a main ingredient in sand, is capable of either conducting electricity, or containing it, which is what makes it an ideal material as a chip. Chip manufacturers add other metals, such as aluminum, copper and gold, to enhance the chip's capabilities. Many microchips are only 2 to 3 millimeters square and a a couple of millimeters thick. The actual circuit design is drawn onto the chip using ultraviolet light with a stencil, or mask, as a guide. Afterwards, wiring and transistor components are built onto the design. Complex integrated circuits can have multiple layers of built-in, interconnected components. The data storage and manipulation capabilities of microchips are performed by these built-in transistor components. A simple chip can have as many as 3,000 transistors. The electric current is translated into useable data by sending the current through the circuit in a series of charges. The charges actually become the language needed to communicate with a receiving device. Boolean logic is the language used to translate electrical currents into useable instructions for a computer. In its simplest form, Boolean logic is a binary code that uses two values--true and false, or "on and off"--to translate electrical current into a useable message.

Microchips offer countless uses in multiples engineering and technological areas, including physics, science, optics and biology. Progress made in one area has a progressive effect on the others. One particular field that poses great promise is photonics. Photonics uses the properties of light as a medium for transmitting information. The emerging field of optoelectronics combines the quantum effects of light with the magnetic effects of semiconductor materials. Another new and promising field of study is that of nanotechnology. Nanotechnology works within the realm of atoms and molecules. It's a new dimension of manufacturing that looks to create new and improved substances, materials and processes. With nanotechnology, scientists are working to create viable microchips the size of molecules. If successful, a whole new world of products, and information processing capabilities will emerge.

Why Is Silicon Used for Most Computer Chips?

Around The Home
Productivity
By: David Perez