How to Convert GMT Time in Microsoft Excel

Converting a time in Microsoft Excel 2013 to or from Greenwich Mean Time requires a basic understanding of what GMT is and how it differs from the time zone you are converting it to. With this knowledge, you can convert any time to GMT or convert GMT to another time zone by adding or subtracting the time difference.

GMT is a time zone used by the U.K. and some African countries, representing the mean solar time at the Royal Observatory in Greenwich, London. It was the world's first time standard until 1960, when it was replaced by Coordinated Universal Time, abbreviated UTC, as the world time standard. While GMT is now a time zone, just like Eastern or Mountain time, many people still refer to it as the standard, perhaps because it's synchronized with UTC.

The U.K. is not always on GMT. From March to October, the U.K. is on daylight saving time, known as British Summer Time, which is one hour later than GMT. 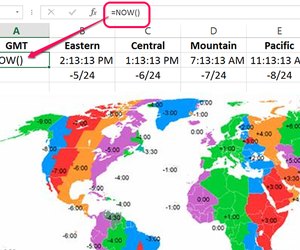 Enter Excel's NOW function by clicking a cell and typing =NOW(). By itself, the NOW function returns the current date and time based on your computer's clock. Unlike most other functions, nothing goes in the parenthesis. 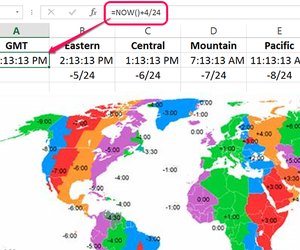 Converting From GMT to Another Time Zone 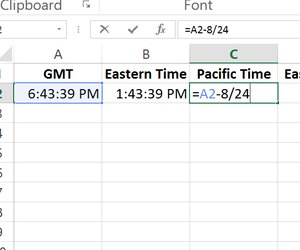 If the time zone that you want displayed is using daylight saving time, subtract an additional hour.

How to Convert Excel Time Difference to Decimal Number

How to Call Australia From the United States

Around The Home
Entertainment
By: Leah Waldron-Gross

Around The Home
Productivity
By: Danielle Cort

How to Change Times From AM to PM in Excel

Around The Home
Productivity
By: Darryl Brooks