How to Fix a Memory Parity Error 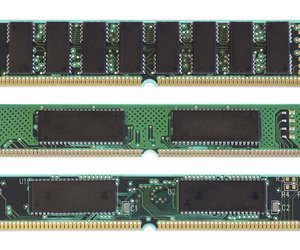 Resolving parity errors may be as simple as connecting the computer to a different power outlet or replacing the surge protector. The computer's motherboard and power supply have built-in capacitors that can compensate for voltage irregularities, but the component is unable to compensate for poor power continuity. Additionally, the outlet and surge protector should be properly grounded to prevent power-surge damage to the random-access memory, which can cause parity errors.

Electrostatic discharge and electromagnetic interference from nearby objects can cause infrequent, or "soft," parity errors. You can work around ESD and EMI by increasing the distance between the computer and the disruptive source. Power cables, power distribution units, lighting systems, power supplies and power generators are common ESD and EMI sources. Additionally, nearby magnets can cause parity errors.

Incorrect RAM timings can overload the capacitors and create parity errors in a computer when the CPU can't access the RAM fast enough, according to Microsoft. Timing-caused parity errors do not always show up when Windows first loads but rather several minutes into operation. Modern computers are able to work with RAM modules with different ratings by running at the slowest module's fastest speed, which means memory parity errors from bad RAM timing are usually caused by user tampering. You can resolve the problem by returning the RAM timing to the initial setting. Alternatively, you can load the "Safe" or "Default" BIOS settings to troubleshoot.

If you recently installed new RAM in the computer, try removing the new modules -- replace new modules with old ones if needed -- and running the computer normally. If the parity error goes away, the problem is with the new RAM. However, it's possible for existing RAM to wear out over time and start producing parity errors. According to defunct computer manufacturer DEW Associates Corporation, RAM designates binary values by rounding an individual memory transistor's electrical charge to full or empty for "1" and "0" values, respectively. The term "cell leakage" refers to a bad memory cell that leaks electric current into a neighboring cell, which in turn offsets the electric charge and changes the stored value. RAM modules with leaking cells can't be repaired and should be replaced.

How to Test the RAM on Linux

How to Check RAM Voltage

How to Fix a Shorted Out Motherboard

Around The Home
Productivity
By: C.A. Rubino Around The Home
Productivity
By: Stephanie Daniels

How do I Repair the Real Time Clock Error?