Your computer has different kinds of memory, some of which saves its data when you turn the power off, some which does not. Computer scientists call the former kind of memory non-volatile and the latter volatile. The reasons have to do with the electrical properties of the memory. Generally, volatile memory tends to be fast and expensive, and non-volatile memory tends to be slow and inexpensive. 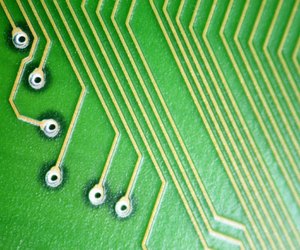 Your computer's RAM loses its data when the power goes off.

When you turn your computer on, the first thing it does is read instructions from ROM, or read-only memory. This memory, programmed at the factory, keeps its data without power, but cannot accept new data. The computer reads and writes into random-access memory, or RAM, at high speeds. Most RAM is volatile memory. Your computer stores large amounts of data to its hard drive, which is relatively slow, but keeps its data when you turn the power off.

Chances are, the computer sitting on your lap has more than one billion characters of volatile RAM memory. Your browser, word processor and other programs work in RAM and use it as a "scratch pad," adding, removing and rewriting data rapidly. This memory consists of millions of tiny transistors packed into integrated circuit chips. It works at moderately high speed, reading and writing in 60 to 80 billionths of a second and retailing for about $15 for a billion characters at 2011 prices.

In addition to your computer's main RAM memory, its microprocessor has its own, smaller, memory units, called cache. The microprocessor has up to three stages of cache, called L1, L2 and L3, which work at speeds up to 1 billionth of a second, or 60 to 80 times faster than normal RAM. Because it is more expensive than standard RAM, the microprocessor has one million characters or less of this kind of memory. Like regular RAM, it loses its data when the power goes off.

In the 1950s and '60s, before transistors made computers inexpensive and compact, engineers used other volatile technologies to store data bits. One, called delay-line memory, stored data as a set of sound pulses in mercury or quartz. The circuits recirculated the pulses in a continuous loop like cars in a toy train set. This scheme stored several thousand memory bits at rates about 1,000 times slower than today's RAM.

How to Reset a Lenovo Laptop CMOS

Around The Home
Productivity
By: Jason Jensen