What Is Flash IC?

First developed in the 1980s, flash memory has become an important technology for computers and consumer electronics. As with other kinds of solid-state memory, it comes as integrated circuits, or ICs, each having millions of tiny transistors on a silicon chip a few millimeters square. Flash saves data permanently, unlike other types of memory ICs, which retain data only as long as the power stays on. 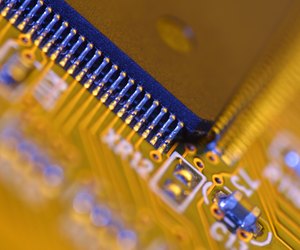 Integrated circuits are distinguished more by the electronics inside than their external packaging. Physically, ICs are rectangular plastic blocks roughly the size of hard candies. Depending on the package, they have from three metal pins or external wires to hundreds. The pins carry electrical power and data signals into and out of the IC. The plastic package protects the silicon chip inside. All the flash IC's electronic circuitry is in the chip.

Computers traditionally used two basic kinds of memory ICs: RAM and ROM. RAM, or random-access memory, serves as the computer's work area and temporary scratch pad. It stores and retrieves data in billionths of a second, but loses the information when you turn the computer's power off. Because of this, RAM is called "volatile memory." ROM, or read-only memory, contains important, basic computer instructions programmed at the factory. When you turn your computer on, the first thing it does is read its ROM instructions. Like RAM, ROM is fast. It is non-volatile, storing its data permanently, but, once programmed, traditional ROM chips cannot receive new programming. Flash occupies a middle ground between RAM and ROM. It is non-volatile, so data saved in it remains even without power. The computer can access the data on it at high speeds. Unlike conventional ROM, flash can be rewritten 100,000 to millions of times.

In 2011, the highest-capacity flash ICs store more than 100 billion bytes of data. This is enough to record more than 16 hours of high-definition video or keep millions of traditional text documents. Because of its high storage density, high speed and non-volatile memory retention, flash chips have been steadily replacing magnetic media, such as floppy disks and hard drives, for bulk data storage.

Small consumer electronics gadgets now use flash ICs to store factory default programming. If the manufacturer upgrades the software in the device, they can post a program on the Web to "re-flash" the item, replacing its old programming with something newer. All USB thumb drives use flash memory. Most MP3 players and many video recorders now use flash instead of small hard drives or tapes. Smartphones have typically from 4GB to 32GB of flash memory to store programming, videos, photos and music. SSDs, or solid-state data drives, use flash in place of a hard disk. Its lighter weight, higher performance and greater physical ruggedness benefit laptop computers.

Around The Home
Productivity
By: Derek Dowell

Around The Home
Productivity
By: Nadia Jorney

What Is the Difference Between a Flash Drive & a Thumb Drive?