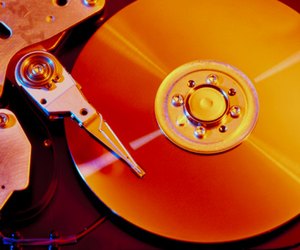 Secondary storage retains data long-term when computers are turned off or restarted.

Magnetic drives, or hard drives, are the most common form of secondary storage. All modern computers typically use at least one internal hard drive, and many come equipped with more. Hard drives are also frequently attached externally through a Universal Serial Bus (USB) or Firewire, and they are also used in arrays for redundant and recoverable storage in case of accidental data loss.

Disk drives were the former kings of secondary storage, but for the most part they have fallen by the wayside. Disk drives operate similarly to hard drives but use a much less dense material to store data. Initially, disk drives were the cheapest way to store data, but eventually the price per unit of storage on hard drives superseded the capacity and price of disk drives. A 3.5-inch disk could hold, at most, 1.44Mb of data, or about one millionth of the data of today's typical hard drive.

Optical storage drives, such as compact disks (CDs) and digital video disks (DVDs), were the initial successors to disk drive secondary storage. Their ability to hold much more data and their low cost were more than enough to offset the slow write speeds. Read speeds for optical storage drives have remained much faster than disk drives throughout their lifespan. As technology has improved and media prices have remained low, optical storage remains a viable and popular means for portable secondary storage.

Flash memory has enjoyed a boom in popularity and technological advances. It functions much like a hard disk in term of access, albeit faster due to the storage medium not being sequentially written like a hard disk platter. Flash memory can be thought of as slower, non-volatile memory, but it is still unable to directly access a computer's CPU. As its capacity has increased while its prices have fallen, flash memory has become a direct competitor of hard disks: it has faster read and write times and better mechanical stability, as it has no moving parts.

Around The Home
Productivity
By: Calum Page

What Are the Characteristics of Storage Devices?

Around The Home
Productivity
By: Amber Viescas

Around The Home
Productivity
By: Nadia Jorney

Around The Home
Productivity
By: Kevin Fobbs