The Advantages of Storage Devices

If there is one thing that nearly every computer owner needs, it is a place to store his data. Data storage is one of the areas of computing that has evolved most in recent years, and computer storage devices are now incredibly varied in terms of cost, performance, size and storage space. Each type of computer storage device has its own advantages, and you may find that the ideal solution for your storage needs involves a combination of storage types. 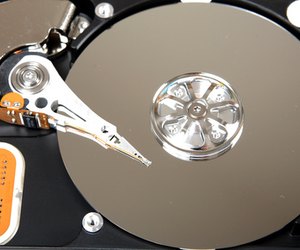 The hard drive is a common storage device.

The hard disk drive--or simply hard drive--is the primary storage device in most personal computers. Hard drives use magnets to record data on rotating metal platters. The greatest advantage of hard drives is cost--often, just pennies per gigabyte of storage space. No other computer storage medium can compete with this. Additionally, hard drives are nearly the fastest devices available for data storage, exceeded only by solid state drives.

An optical drive is any drive that uses a lens to read and write data, such as a CD, DVD or Blu-ray drive. Optical discs are forms of portable storage, because you can remove one from your computer and read it on another machine. Some types of optical discs, such as recordable CDs and DVDs, are extremely inexpensive. Optical discs are also the natural format to use if you are creating content to view or listen to in a DVD or CD player.

Like solid state drives, flash drives and storage cards use flash memory to store data. They are far less expensive than solid state drives, however, as they offer less storage space and do not include the same technologies designed to maximize speed. Flash drives and storage cards are extremely small, and in the case of flash drives, connect to the computer via a USB port. Most computers have USB ports, and all modern operating systems support flash drives natively, so many people carry a flash drive regularly. You seldom have to worry about whether a computer will be able to read your files if you store them on a portable flash drive.

What Is a Computer Optical Drive?

Around The Home
Productivity
By: Debopriya Bose

What Are Storage Devices?