What Are the Functions of a Pen Drive?

The Pen drive, more commonly known today as a USB drive, serves as a mobile storage for computing systems. Designed off of a non-volatile memory type, these small memory units are praised for their use in small electronics such as cameras and MP3 players. Praised for their solid state nature and ease of mobility, pen drives have become a common and inexpensive form of computer storage. 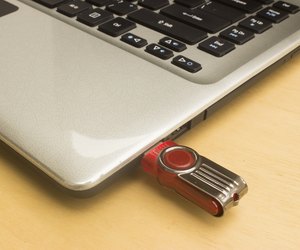 A flash drive connected to a laptop.
credit: AndiArman/iStock/Getty Images

The first flash drives were designed and marketed through a joint venture between the IBM and Trek technologies corporation. These initial drives were released in last quarter of the year 2000 as "Thumb Drives" and featured an 8MB storage capacity that easily surpassed the floppy drive's 1.44MB storage capacity.

Pen drives act as permanent storage drives that interface with the computer through a USB or Firewire port. These Pen drives store information for any of the same uses an internal hard drive. The Pen drives use flash memory modules that hold data in a NAND memory configuration, which have increased sequential read and write speeds but reduced random access times.

Pen drives today come in capacities of 128GB and higher and often weigh less than 1 ounce. This high-density storage is perfect for large scale data back up and retrieval. Also, the plug and play connectivity of USB and Firewire coupled with their diminutive size of often less than 2 inches provides for easy mobility of large data sets.

Though Pen drives offer large data capacity and mobility, they are not well suited for intensive memory applications. Pen drive flash memory technology has a much shorter MTBF (Mean Time Before Failure) than standard internal mechanical hard drives. The memory cells can only be written to and read from so many times before they fail completely and are ignored by the memory module.

Recently, the so-called solid state drives, which are built off the same technology as Pen drives, have been released for use as internal hard drives. These drives use an advanced memory architecture that maintains of record of the reads and writes to each memory cell and staggers them appropriately to increase the life of the drive. These hard drives boast impressive access times; however, due to their foundation as Pen drive derivatives, they still lack random access efficiency, which leads to decreased multitasking ability when used as a computer's main storage device.

How Does a Pen Drive Work?

Around The Home
Productivity
By: Steve Tuffill

Around The Home
Productivity
By: Randall Shatto