How to Make a Division Sign on a Keyboard

U.S. keyboards don't include the division character because they use only symbols from the American Standard Code for Information Exchange encoding scheme. To make up for this omission, most software calculators, spreadsheet applications and programming languages recognize the "/" symbol as the division operator. Use the Alt code in Windows or the Accent code on a Mac to insert a Unicode division sign into any text field or editable document. The Unicode character set adds thousands of symbols to the original 256 ASCII characters. 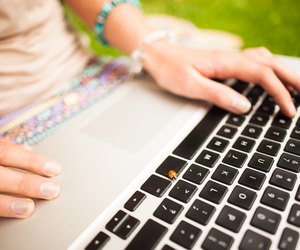 In Windows 8.1, hold down "Alt" while typing a Unicode symbol's decimal value to insert the character at the cursor position. The division sign's Unicode value is 0247 in decimal notation, and you must type the leading zero for the shortcut to work. After you hold down "Alt" and type "0247" (without quotes, here and throughout), the division sign is inserted in the active document or text field. Copy and paste the symbol like any other character.

Use a word processor's special character table to browse Unicode characters by category. In Microsoft Word, choose the "Insert" tab and click "Symbol" in the Symbols section. In LibreOffice or OpenOffice, click "Insert" and choose "Special Character." Although the Unicode table includes a math operator section, the division symbol, like the multiplication symbol, is part of the Latin-1 subset. When you select a character from the table, the window displays the symbol's hex and decimal values. The table lists characters in numerical order, so find the division sign by selecting any character to see its value and then searching forward or backward for number 247. Insert the symbol by clicking "Insert" or "OK," depending on your program.

Most applications that perform division recognize the "/" character as the division or fraction symbol. For example, Microsoft Excel, LibreOffice Calc and OpenOffice Calc perform division from left to right when they read a "/" symbol. Math software and programming languages follow the conventional order of operations, calculating values in the following order: parentheses, then exponents, then multiplication or division, then addition or subtraction. Use parentheses to perform addition or subtraction before division or to perform division before an exponent, as in the following statement:

The "^" character performs an exponent operation, raising the term evaluated on its left -- in this case, 2 -- to the power of 7. With parentheses, this statement's end result is 128, and without them, it equals about 2.

How to Make a Cross of the Deceased in Microsoft Word

How to Make the Euro Sign on a Keyboard

How to Type a Triangle Character on the PC Keyboard

How to Get a Division Bracket in Microsoft Word

How to Type a Paw Symbol

Around The Home
Productivity
By: Richard Kalinowski