How to Make a Stereo Speaker Louder

A louder speaker is one that can convert more electrical power into sound than a quieter speaker. The ways to make a stereo speaker louder all have to do with getting more power to the speaker, you can do this through a more powerful amplifier or better speaker cables. It's also possible to use the natural acoustics of a room to amplify the sound of a speaker. 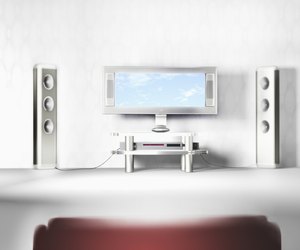 Check the wattage and impedance ratings for your stereo speaker. Speakers will be rated at a certain amount of wattage for either peak or continuous use. Peak wattage means that the speaker can only use that amount of power for a very short amount of time. Continuous wattage can be safely used on the speaker all the time. The continuous wattage is abbreviated as RMS for "root mean squared." This is the formula by which the continuous rating is figured. The impedance is measured in ohms, and the lower the impedance, the more power will get from the amp to the speaker. Most home stereo speakers have eight ohms of impedance and should be connected to an amplifier that is also 8 ohms.

Increase the power coming from the amplifier by getting an amp that produces more watts per channel. As with the speakers, the wattage may be rated as continuous or peak. The continuous rating is preferred. So, for example, if you are trying to drive a speaker rated to 100 watts from an amp that can only produce 50 watts per channel, the speaker will never be as loud as it's capable of being. Get a new amp with outputs that match the ratings for the speaker. Note that if you exceed the power rating for the speaker, you may damage it. If you have a speaker rated for 50 watts and you connect it to a 100 watt per channel amplifier, you can make the speaker louder, but the excess power will eventually destroy the speaker. Driving speakers with too little power has no risk of damaging them.

Upgrade the cable between the speaker and the amp. This will only give a small boost to the volume, but if the wire is old or damaged, it might be interfering with the power getting from the amp to the speaker. Upgrade the wire to a 14-gauge solid core wire to eliminate as much impedance from the wires as possible.

Position the speakers to take advantage of the acoustics in the room. Put the speaker in a corner or alcove so that any sound that might go sideways from the speaker is re-directed toward the middle of the room.

The Specifications for a JBL Professional M115-8A

Around The Home
Entertainment
By: Alexander Rudinski

How to Determine if a Speaker is Blown

What Is a Mono Amplifier?

How to Repair a Broken Speaker

Around The Home
Entertainment
By: David Woo

Around The Home
Entertainment
By: Robert Godard

How to Match the Speaker Watt to the Amp Power

Around The Home
Entertainment
By: Ian Kenney