How to Ping a Network Hard Drive

Use pinging when you want to test the connection speed between computers on a network. When you know the computer's Internet protocol address, consisting of a series of numbers configured in a certain pattern, find out how fast it responds to your request by pinging it from your computer. The term originated with submarines and the use of radars. A submarine would test the distance between itself and another object while underwater by sending one ping, and then measuring the time it took for the echo response to return. 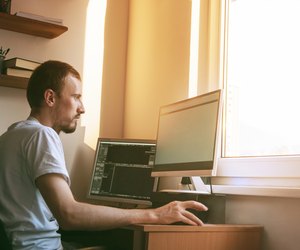 Obtain the name of the computer you wish to ping on the network, or its Internet Protocol (IP) address. The ping process works on the computer itself, rather than the computer's hard drive. It works by sending an "Internet Control Message Protocol" echo request to a specific computer and awaits the response. While it waits, it measures the time it takes for the other computer to respond.

Press "Start" on the button at the bottom of a Windows computer. On the menu that pops up, select "Run." This opens a command window for accepting DOS commands.

Enter "ipconfig /all" into the open screen. Ensure there is a space between the word "ipconfig" and the backslash and the word "all". View the material on the screen. Locate the name or IP address of the computer that has the hard drive you want to ping.

It should return something like this, where XXX.X.X.X. represents the IP address assigned to the computer or network host:

This lets you know how long it took to send the "ping" to the other computer and return.

What Does it Mean to Ping Someone Online?

How to Ping My Computer

Around The Home
Productivity
By: Cooper Temple

How to Send a Wake on LAN Command

How to Find a Computer Name on a Network Using Ping