What Does it Mean to Ping Someone Online?

Inspired by echolocation and named after the sound sonar makes, a ping measures the time it takes to send a test unit of data between two computers. The lower the ping time, the less lag there is when sending actual data back and forth. High ping times can indicate network issues and cause problems with time-sensitive information, such as a player's location in an online game. 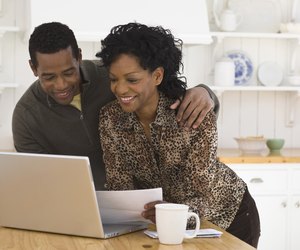 A couple is working on their laptop.
credit: Comstock Images/Stockbyte/Getty Images

When you use the ping tool, your computer sends a small piece of data to another computer over the Internet or local network. That computer in turn copies the data and sends it back to your computer. Ping time reflects how long it takes to send and receive the data, measuring the network's responsiveness; it does not indicate network bandwidth, which measures how much data the network can transfer per second. Pinging also checks for packet loss -- data not returned by the target computer.

To run a ping, open the command prompt by pressing "Windows-R" and entering "cmd." At the prompt, type "ping" without quotes, enter a domain name, such as "google.com" and press "Enter." The tool sends several pings and displays how long each takes to return. If the ping fails, try using an IP address, such as "64.233.185.101" for Google, in place of a domain name. Pings that fail to reach a domain name but succeed with an IP address indicate a problem with the DNS server, which translates IP numbers into domain names. If the ping still fails or has times over a few hundred milliseconds, try pinging a different site. Slow or failing pings to every site indicate a problem with your connection or your Internet service provider, while poor pings to a single site indicate a problem on the site's end.

Though a single ping contains little data, it does impart a small workload on the server being pinged. Malicious users have exploited this fact to launch denial-of-service attacks by flooding a server with nonstop pings, often from multiple machines simultaneously, preventing the server from carrying out regular operations. An older method of malicious pinging used abnormally large packets of data -- a "ping of death" -- to crash servers, but modern networks are no longer vulnerable to this type of attack.

Ping as a Slang Term

Outside its technological use, "ping" has become a term for contacting someone online. For example, sending someone a reminder about an upcoming appointment or meeting, whether by email or text message, could be called pinging that person. A ping could also refer to grabbing someone's attention online without direct contact, such as through a poke on Facebook or a mention in a tweet.

How to Enable WAN Ping on a Linksys Router

How to Test Your Ping Time

How to Ping a Network Hard Drive

Around The Home
Productivity
By: Laurie Brenner

How to Write a Script to Ping Every 5 Minutes

Around The Home
Productivity
By: Mickey Walburg