Liquid crystal display monitors use a combination of a backlight and tiny filters, controlled by an electrical current, to produce images. This technology lies behind displays that range from the personal tech gadgets such as watches to giant high-definition TVs. LCD screens stand on their own or work in tandem with the touch-screen technology found in smartphones and touch-capable computers. 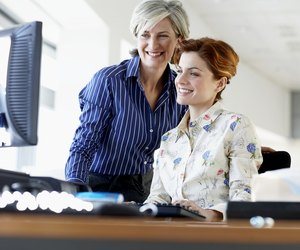 LCD screens dominate the TV and computer monitor market, usurping the once-ubiquitous cathode ray tube. According to research by NPD DisplaySearch, LCD TVs made up 90.4 percent of new TV shipments worldwide in 2013, compared to CRTs' 4.4 percent. Although LCDs have a few downsides when compared to CRTs, such as a worse contrast ratio, they don't flicker like CRTs and offer lighter weight and lower power consumption. LCD monitors are commonly associated with HD resolutions; even though some CRT TVs support 1080i, the vast majority of CRTs max out at 480i.

Numerous devices and gadgets use integrated LCD screens that work just like their larger cousins. Nearly every digital camera includes an LCD screen in addition to -- or in place of -- the viewfinder, providing both a preview of a shot and a way to review pictures. Even devices that use touch screens often generate their images using LCD technology, both in the case of capacitive touch screens, such as on smartphones, and resistive touch screens, as on the Nintendo 3DS. LCDs also show up out of the house, everywhere from car navigation systems to billboards.

Unlike on CRT monitors, the colored pixels in LCD screens do not generate their own light. To make LCD screens visible without ambient light, the monitors include lights behind the screen. Normally, this light comes from fluorescent bulbs that cast a glow over the entire screen. Advanced monitors use an array of LED lights that the monitor can dim in groups, improving the black level on individual sections of the screen during dark scenes. Other models feature LEDs around the edge of the screen, allowing for an extremely thin design. These monitors are often called "LED TVs," but they still use a regular LCD screen.

Long before LCD TVs became the norm, monochrome LCD displays already had a place in every household as part of digital clocks, watches and basic calculators. Unlike LCD TVs, these devices only include pixels in the areas necessary to form the numbers, causing the slightly visible "88:88" effect. Old handheld game systems such as the Game & Watch used a similar method, with LCD pixels in preset areas that varied by game. In 1989, Nintendo released the original Game Boy, which used a dot matrix LCD display -- a screen with a full array of pixels that made it possible to create fluid animation. Similar displays are still used in basic cell phones.

What Is a TFT Touch Screen?

What Is the Difference Between SMDs and LEDs?