My Computer Won't Recognize My Scanner

If you're trying to scan a document on your computer and the scanner isn't responding, you may have a configuration, hardware or compatibility issue. The problem could be as simple as a loose cable. Check for configuration problems and hardware failure if the scanner previously worked with the computer. Check for driver and compatibility issues if you're using the printer for the first time on the computer or have upgraded your operating system. 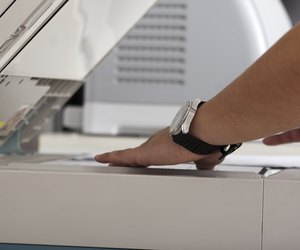 The first step to troubleshooting any hardware recognition issue is to reboot the computer and power cycle any problematic peripherals like scanners. According to USA Today, rebooting the computer is a catch-all fix that can resolve glitches and errors by letting the computer and connected devices start back at square one. Resetting the computer returns hardware or software to a state prior to encountering the glitch. The scanner should work again unless it trips the same glitch, which is unlikely.

If you've recently upgraded your Operating System or are trying to use an older scanner on a newer computer, your devices may not be compatible. The computer won't recognize the scanner unless the device's drivers and scanning software are compatible with the system. While Windows 8 can run older versions of Windows drivers and software, it is not a guaranteed compatibility. Check the scanner manufacturer's support website for drivers and software specific to your operating system and scanner model. If the scanner's software is not compatible with the operating system, you may still be able to use other programs like "Windows Fax and Scan" and "Paint" with the device.

The scanner and computer may not recognize each other because of a problem with the USB or FireWire connection. To troubleshoot cable problems, try reconnecting both ends of the cable and using a different port on the computer if possible. You can rule out a faulty connection cable by testing the cable on another device you know works with the computer. For Wi-Fi units, check the device's wireless configuration settings and reconnect it to the wireless router.

The computer may not recognize the scanner because of a problem with the drivers or device software. Instead of trying to fix the problem, it's faster to just remove all scanner software and reinstall it. Try using Windows Update or check the manufacturer's website for the latest versions of software and drivers: they may resolve the problem. Older scanners that use TWAIN technology need special software and won't work directly with the default Windows programs, so you may need to use the software that came with the scanner.

How to Install a Scanner on a Computer

Around The Home
Productivity
By: Lita McLeary

Around The Home
Productivity
By: Rebecca Gilbert

What Is McAfee OAS?

Around The Home
Productivity
By: Michael Dance

How to Fix an Offline Printer