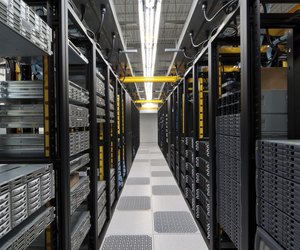 Peer-to-peer networks involve two or more computers pooling individual resources such as disk drives, DVD players and printers. These shared resources are available to every computer in the network. Each computer acts as both the client and the server, communicating directly with the other computers. On a peer-to-peer network, for example, a printer on one computer can be used by any other computer on the network. These networks are inexpensive to set up. All you need is a way to connect them, like an Ethernet cable or a Wi-Fi router.

A client-server network involves multiple clients, or workstations, connecting to at least one central server. Most data and applications are installed on the server. When clients need access to these resources, they access them from the server. Servers often have private user directories as well as multiple public directories.Client-server networks tend to have faster access speeds because of the large number of clients they are designed to support. The clients are allowed to function as workstations without sharing any resources. It is easier to upgrade software applications and files because they are held on one single computer. System-wide services can be provided through the server software. Security is enhanced on a client server network because the security is handled by the server.

Peer-to-peer networks are typically less secure than a client-server network because security is handled by the individual computers, not on the network as a whole. The resources of the computers in the network can become overburdened as they have to support not only the workstation user, but also the requests from network users. It is also difficult to provide system-wide services because the desktop operating system typically used in this type of network is incapable of hosting the service. Client-server networks have a higher initial setup cost. It is possible to set up a server on a desktop computer, but it is recommended that businesses invest in enterprise-class hardware and software. They also require a greater level of expertise to configure and manage the server hardware and software.

Peer-to-peer networks require software to connect to each other. If they all use the same operating system, connections are relatively easy -- like connecting two computers using Windows HomeGroup. If the computers use different operating systems, you may need to use additional software before they can communicate. Most of the software required for a client-server network is installed only on the server. Many different types of software including printer drivers, FTP and security software can be installed on a single machine. Client computers only need to have software that enables the computer to connect to the server. Often, the client computers have this software installed by default.

Due to the security issues and the lack of extensibility, peer-to-peer networks are usually found in homes or small businesses with few security concerns. Client-server networks should be used in environments where growth is expected, security is important and faster access times are required.

Around The Home
Productivity
By: Chris Loza

Around The Home
Productivity
By: Alex Saez

How to Set Up a Server Network

Around The Home
Productivity
By: Ryan Bauer

What Are the Functions of Client & Server Computers on a Network?

Around The Home
Productivity
By: Joey Perez