A client/server network has three main components: workstations, servers and the network devices that connect them. Workstations are the computers that are subordinate to servers. They send requests to servers to access shared programs, files and databases, and are governed by policies defined by servers. A server "services" requests from workstations and can perform many functions as a central repository of files, programs, databases and management policies. Network devices provide the communication path for servers and workstations. They act as connectors and route data in and out of the network. 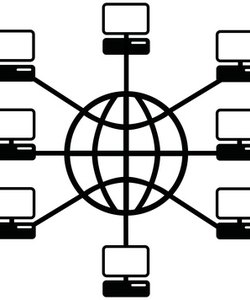 Client/server networks have servers, workstations and the devices that connect them.

Workstations, or client computers, initially differentiate themselves by the operating systems running them. In a client/server network, Windows 2000, Windows XP, Windows Vista and Windows 7 are examples of workstation operating systems. Aside from being relatively cheaper than server operating systems, their functions and processes are essentially intended for client computers. Centralized databases, shared programs, management and security policies are not part of their operating systems. What they have are localized versions of databases, programs and policies that can be applied individually to them. Workstations also have lower technical specifications than servers in the areas of memory, hard drive space and processor speed, because they are not required to process requests or record data from multiple computers.

Servers are distinguished by different sets of operating systems like Windows 2000 Server, Windows 2003 or Windows 2008. They also have higher memory and hard drive space and faster processors because they store and service multiple (and often simultaneous) requests from workstations. A server can assume many roles in a client/server network. It can be a file server, a mail server, a database server and domain controller all at the same time. A well-set-up network, however, delineates these roles to different servers to optimize performance. A server, regardless of what role it has, essentially acts as a centralized repository of network files, programs, databases and policies. It makes for easier management and backup because it is not dependent to individual user configurations, but can be universally and uniformly implemented across the network.

Network devices connect workstations and servers. They ensure that requests to and from workstations are routed properly to the correct server. Several network devices each provide different types of network connectivity. In a simple client/server network, a hub can connect a server to multiple workstations. It acts as a repeater, passing on data from one device to another. Bridges separate network segments. This is useful for offices with several departments to distinguish which department a particular workstation belongs to. Another network device, a switch, is similar to a bridge, but can detect conflicts between network segments like same IP addresses or computer names across departments. Wide-area networks use routers to connect network segments in different locations. Routers are also used to connect networks, or route information to the Internet.

Client/server networks usually have network printers or scanners, which are shared and can be used by all computers in the network. Instead of installing them individually to each computer, they can be placed in one location that everyone can access. This saves both space and money.

How to Set Up LAN Network

Around The Home
Productivity
By: KhalidA

How to Reset a 120-Day Terminal Server Timeout

Around The Home
Productivity
By: DaveW

The Advantages and Disadvantages of Full Duplex Ethernet

How to Find an LDAP Server

How to Get the SNMP Community String in Linux