If you have several electronic items, then you know it would be quite a hassle to run cords from one wall outlet to another and still have related electronics in a general location. The power tap solves this issue by providing additional outlets while taking up only one slot on the wall outlet. Some people opt to purchase a power tap thinking it is the same thing as a surge protector; these products do, after all, look similar. However, they serve very different purposes. 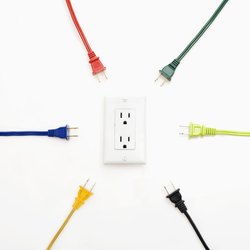 Power taps and surge protectors are useful for plugging in multiple devices.

The development of power taps and surge protectors took place around the dawn of the computer age. The computer tower and associated hardware needed several power outlets. It was inconceivable to install a great amount of wiring for wall outlets for the purpose of computer use. The portable outlet version resolved this matter.

A power surge occurs when power line voltage spikes for more than 10 milliseconds. For the most part, motor-powered devices cause the majority of surges. These devices consume energy, and when they shut off, that energy is re-routed as a voltage surplus. On the other hand, lightning and thunderstorms cause the most dangerous voltage surges. Electronics that are plugged in, even if they are not being used, are susceptible to damage during severe weather conditions.

The power tap, also known as the power strip, generally has an on/off switch, several outlets, a circuit breaker and a bendable cord. Inexpensive devices such as coffee makers and toasters are ideal for power tap use. Power taps are reasonably priced since many households and offices tend to have several basic appliances. Of note, power taps are not extension cords. Extension cords are for temporary use only and have a different standard from Underwriter Laboratories (UL), the evaluator of power taps and surge protectors. Surge protectors meet UL 1449 while power strips meet UL 1283 standards.

Surge protectors, also known as surge suppressors, are for more expensive major electronics such as computers, televisions and home entertainment systems. These protectors have added electrical filtering mechanisms. The surge protector will list the electric rating in Joules of energy and the maximum voltage it can withstand in the event of a voltage spike. This list may be printed on the surge protector's packaging and sometimes on the protector as well.

The surge protector protects only items plugged into its frame. Consult the Joule rating to determine whether or not the item will be appropriate for your usage purposes. Be aware that It will not protect the wall circuit from voltage problems.

Is it OK to Leave a Charger for a Cell Phone Plugged In?

Around The Home
Entertainment
By: Ilana Waters

Around The Home
Entertainment
By: Michel Charles

Around The Home
Productivity
By: Darren Johannsen Around The Home
Productivity
By: Jean Brewer

Around The Home
Productivity
By: Gerry Poulos

Around The Home
Productivity
By: Seamus Islwyn