The Advantages of Using a Computer Over a Manual Typewriter

Technology expands rapidly, opening new doors that might seem nearly impossible to the casual observer – at least at first glance. In less than 100 years, basic flying evolved into machines that were capable of reaching the moon; the average lifespan jumped by more than 20 years and computers evolved to become a technology central to daily living. Although typewriters and computers use the same QWERTY keyboard design, there are significant advantages computers hold over typewriters. 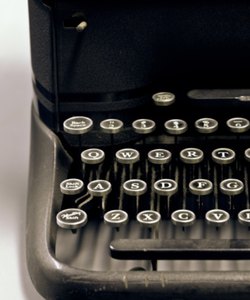 If you think a typewriter's great, you'll love computers.

One of the main key attributes of computers is that everything typed is stored digitally, as opposed to an analog system, such as that on typewriters, where everything written is a mechanical transfer to paper. Typewriters waste paper and result in the user having to store a physical result. Digital documents can be extremely long and, because they're virtual, storage space is virtually unlimited. This also makes computers more environmentally friendly, as they don't waste paper.

If you want to change sections, small grammatical mistakes or sentences here and there, then you'll have to start a new page – if you're using a typewriter, that is. Computer users live in a world of luxury when it comes to page alterations. Anything can be deleted and altered, whether it a single word, phrase or letter. On top of this, writing on a computer is similar to writing with an unlimited amount of ink – you won't have to worry about changing it out.

If your writing needs extra formatting, then a computer wins over a typewriter. Simple italics, bolds, underlines and bullet points can be added to any document. Additionally, computers can add graphs and images to writing when using a simple word processor. Numbers and calculations can be more thoroughly processed and stored in spreadsheet programs, as well.

Another indirect advantage of computers over typewriters is seen in the transfer of documents. Many people don't just write documents for themselves; they write knowing that the documents will be sent to other people. With a physical document written on the typewriter, the only option is to deliver in person, by mail or by fax – which only works on very short documents. Computers create digital documents that can be sent anywhere in the world in the blink of an eye via email, or through file transfers and uploads through the Internet.

What Are Computer Storage Devices?

Around The Home
Productivity
By: Dan Keen

Short Summary of the History of Computers

Around The Home
Productivity
By: Tucker Cummings

Around The Home
Productivity
By: Alex Cosper