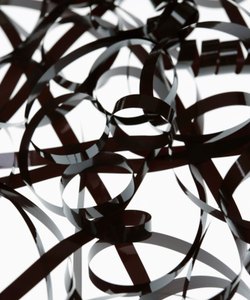 Degaussing tapes removes all stored data. Commonly known as demagnetizing, degaussing actually rearranges the magnetic tape surface, deleting all previously stored data. Each tape has it's own magnetic field. Proper degaussing requires prolonged exposure to a magnet with a field two to three times stronger than the magnetic field of the tape. Degaussing involves no physical destruction of tapes. Most tapes can be recorded on multiple times; erasing them saves money and prevents harm to the environment.

Burning tapes ensures that no useful data remains. Most tapes consist of polymer strips treated with magnetic material to make a recordable surface. Like most polymers, magnetic tapes have a low-ignition temperature. In fact, some tapes contain highly flammable materials. Burning of tapes releases toxic chemicals into the environment and may be illegal in some areas. Local fire and environmental laws should be researched before burning tapes. Large quantities of tape make risks higher so all fire safety precautions should be observed.

Shredding tapes reduces the likelihood of data recovery. The time involved in piecing the tapes together deters people from trying to reconstruct them. When shredded, blades cut tapes into pieces too small for total reconstruction. Tapes get cut across the tape and along the length of the tape. The small pieces create waste that sits in landfills for a long time. If environmental issues concern the owner of the tapes, shredding may be a poor option even though it is cost-effective.

Many companies offer data security services. These companies destroy magnetic tapes in the best way possible. The tapes may be burned, degaussed or shredded depending on the customer's wishes. Reputable data security companies allow the owner to witness the destruction of their tapes to remove any doubts. Websites and phone books contain contact information for data security companies. A good company will have good reviews from past jobs as well as bonded employees hired after background checks. Many offer credits for tapes deemed reusable after degaussed.

What Are the Features of Magnetic Tape?

Around The Home
Entertainment
By: Malinda Smith

How to Dispose of Computer Disks

How to Get Surveillance Tapes

Around The Home
Entertainment
By: Gary Wright

Why Is Internet Security Important? How to Make a Copy Protected DVD