The keyboard has been kicking around at least since John Jones' mechanical typographer in 1852 and Christopher Sholes' type-writing machine in 1867 (a.k.a. the original typewriter). Sholes established the QWERTY keyboard layout that dominates modern keyboards, and 1961's Selectric typewriter from IBM brought the boards into the electric age. 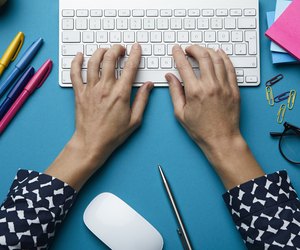 With so many examples defining even the earliest days of keyboards, it's little wonder that we have way more than two types to choose from – keyboard types vary both in character layouts and hardware form factors, so the rabbit hole goes pretty deep. Take a moment to appreciate the wealth of unique options we enjoy when it comes to tapping away and getting our QWERTY on.

The key layout – or the order in which the character keys are distributed on the board – is one way to define the varied types of computer keyboards.

QWERTY is so named because the first five keys, reading from left to right are "Q," "W," "E," "R," "T" and "Y." That naming convention remains consistent across numerous layout types, including the common runner-up layout, AZERTY. This layout only switches five buttons to focus more on linguistic accent symbol keys and is predominantly used in French-speaking and African countries. QWERTZ layouts cater to central European languages and may vary a bit among themselves. Some countries need a fully custom layout for non-Latin alphabetical symbols, like the Russian JCUKEN keyboard, or Japanese and Chinese keyboards that feature the respective language's native symbols in conjunction with a QWERTY layout.

Dvorak is named for its creator rather than the order of its keys. It was designed in 1936 to increase the typing speed of mostly English-speaking QWERTY users by ensuring that about 70 percent of keystrokes occur on "home row" (the letters, starting with "ASDF," where your fingers naturally rest when typing) compared to the 32 percent of strokes that happen in the home row on a QWERTY layout.

The standard keyboard features keys that are about three-quarters of an inch on center with a roughly 0.15-inch travel distance or point at which the depressed key is registered. Laptop keyboards resemble desktop keyboards but are smaller, built in to the device itself, and typically feature an "Fn" key to help the laptop perform special functions.

The Maltron keyboard not only changes the key layout, it also changes the physical placement of the keys into three groups – a group of letters on each side and a number pad in the middle – and is chiefly used to offer a more comfortable experience to special needs typists.

Some types of keyboards sport distinct form factors that can hardly be called boardlike at all. The flexible keyboard, for example, can be rolled up for travel. It's usually made of silicon and needs to be used on a hard surface to function properly. A handheld keyboard features tiny keys, which resemble old cell phone texting buttons or those on a PDA, and is designed to be used with just one hand.

Of course, chief among nontraditional keyboard form factors is the virtual keyboard. When you pull up an on-screen keyboard on your touch-screen device, such as a smartphone or tablet, you're in virtual keyboard territory. Expect virtual keyboards to continue evolving with new additions such as laser projection keyboards, which use light to project virtual keys onto a physical surface and follow your keystrokes with motion sensors, on the rise.

What Are the Differences Between a Typewriter Keyboard and a Computer Keyboard?

Purpose of a Keyboard

Around The Home
Productivity
By: Jennifer M. Graham

How to Remove Laptop Keyboard Keys

The Disadvantages of Virtual Keyboards

Around The Home
Productivity
By: Mike Sweeney

What Are Computer Keyboards Made Of?