RJ45 is the informal name for a category of eight pinned jacks used in computer networking. These jacks are officially referred to as 8P8C (8 Position 8 Contact) modular connectors, and most commonly found on Ethernet cables. 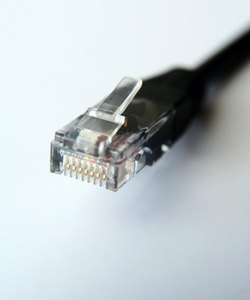 An Ethernet cable with an 8P8C connector, often referred to as RJ45.

The FCC specification for RJ45 is an obsolete specification of a registered jack serving as a physical interface for high-speed modems. The original specification provides for a single data line, terminating in 8-position 2-contact modular connectors (8P2C). This connector has a plastic protrusion that prohibits its use in the 8P8C Ethernet jacks used today.

A Category 5e specification was later introduced with tighter specifications and standards, theoretically increasing ratings to 350 Mbit/s. The new standard also required new cables to include all four twisted pairs.

Over short distances, under ideal signal conditions, and assuming they have four pairs, Category 5 and 5e are capable of transmitting at Gigabit Ethernet speeds. Gigabit Ethernet uses an optimized encoding scheme specifically intended for operation within these lower signal tolerances.

Backwards compatible with Cat 5e, this new cable has strict standards and significant improved shielding. Category 6 was designed as the standard for Gigabit Ethernet, providing native speeds of up to 1000 Mbit/s over a frequency of 250 MHz. By reducing the maximum cable distance from 100 meters to 55, 10-Gigabit Ethernet mode is supported.

Category 6a doubles the frequency to 500 MHz while continuing to reduce noise interference with grounded foil shielding. These improvements remove the cable distance penalty when operating in 10-Gigabit Ethernet mode.

Operating at frequencies up to 600 MHz, Category 7 was designed specifically to support the rated speeds of 10 Gigabit Ethernet. In addition to the shielding introduced by Cat 6e, this new specification provides individual shielding for each of the four twisted pairs. Category 7 has a maximum distance of 100 meters while maintaining backwards compatibility with Cat 5 and 6.

A crossover cable differs from standard Ethernet cables by swapping the transmit pair on one connector with the receive pair on the other. Without the assistance of a network switch, a crossover cable or adapter is often required to directly bridge two devices. Modern devices are increasingly capable of implementing their own internal crossover, reducing the utility of cables and adapters dedicated to this purpose.

How Does an Ethernet Cable Work?

Around The Home
Productivity
By: Paul Favors Around The Home
Productivity
By: William Norman

What Is Thicknet and Thinnet?