What Causes a Ping General Failure?

Ping is a valuable tool for troubleshooting all sorts of network or Internet problems. A ping command sends packets of information to devices on a network or the Internet to find out if they are available for connection. In Windows 8, the error message "Ping: Transmit Failed. General Failure" appears if the computer doesn't have the proper Internet protocol selected. You may select TCP/IPv4 or TCP/IPv6 in the control panel of your computer. 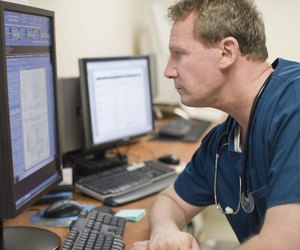 You can only send ping requests from the the command prompt of your operating system. In Windows 8, open the Search box, type "cmd" in the Search field, then select "Command Prompt" from the list of search results. At the prompt, type "ping," a space and then the IP address or domain name of the target. For example, type "ping xxx.xxx.xxx.xxx" or "ping www.mynetwork.com;" then press Enter. Your computer will send four packets of information at one-second intervals.

A ping response shows results for each returned packet on four separate lines showing the round-trip time in milliseconds. It also gives a summary of the packets lost, along with the fastest, slowest and average times. If the target doesn't respond, each line shows "Request Timed Out." If the computer has the wrong TCP/IP setting, in Windows 7 and Windows 8, the message reads, "PING: Transmit Failed. General Failure." In Vista, it reads, "PING: transmit failed, error code 1231." It indicates that you have the wrong TCP/IP setting. In earlier Windows versions, it reads, "Destination Host Unreachable."

Click "Start," and select "Control Panel." Type "Adapter" in the "Search Control Panel" box in the upper right corner and click "View Network Connections" under the Network and Sharing Center tab. Right-click on the network you're using; then click "Properties." Ensure the proper TCP/IP protocol version is checked in the list of optional boxes. At the time of publication, most networks use TCP/IPv4. Don't change any other boxes because they don't affect the ability to ping. Click "Properties," then under the "General" tab, click "Obtain an IP Address Automatically" and "Obtain DNS Server Address Automatically." Then click "OK."

Internet Protocol Version 4 has about 4 billion addresses available, which are rapidly being used up. Version 6 allows 79 octillion times more address space to provide for worldwide Internet expansion, along with several other advantages over version 4. However the Internet Engineering Task Force has been working to design a smooth transition that allows both to exist at the same time until all networks can be upgraded. In the meantime, network designers must choose between the two and can't use both simultaneously. You must make the setting in your computer conform with the network.

How to use a Proxy Server with Google Chrome

How to Set a Default Gateway in Windows

How to Find Your Router's IP Address

Around The Home
Productivity
By: Mike Benson

How to Use Netstat Commands