What Causes Sparkles in My Samsung Plasma TV?

Colored or white "sparkles" in any high-definition television often indicate, at some level, a compatibility issue with the High-definition Multimedia Interface (HDMI) cable. This mild form of connection failure is caused by equipment interaction, cabling, or both. What you are actually seeing are pixel dropouts, the "casualties" of an inadequate cable. Seeing sparkles on a Samsung plasma means that complete signal failure is next. The remedy for these picture artifacts involves a troubleshooting process, isolating the offending item in the signal chain. Recognizing and identifying the reasons for sparkles in Samsung plasmas is the same process as that for any HDTV. 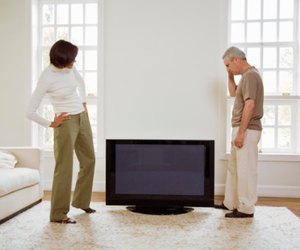 Sparkles on a Samsung plasma are caused by HDMI issues.

A common cause for sparkles on Samsung plasmas is excessive HDMI cable length. In most cases, an HDMI cable must use a repeater as it approaches 100 feet. The sparkles are the result of overall cable resistance impeding the signal. They indicate that you are not far from the signal failing to make it from the source device to the display. Shorten the cable's length or add a powered repeater to regenerate the signal.

As HDMI resolutions and frame rates increase, the demands on the connecting HDMI cable rise accordingly. High-density HD images, such as those produced by Blu-ray, require the use of high-speed cables. Standard speed HDMI simply lacks the bandwidth needed to successfully transmit uncompressed audio and 1080p video, especially once the cable's length exceeds 6 feet. Given that high-speed and standard-speed cables do not often differ much in price, replacing the standard-speed cable often remedies the sparkle issue on Samsungs.

Other devices in the HDMI chain can reduce signal quality. Switchers, splitters and audio/video receivers all add virtual "distance" to an HDMI signal. Using cheaper switching devices, especially those relying on the 5 volts on the HDMI cable for power, can add enough signal blockage to cause sparkles. Remove these items one by one until the Samsung plasma displays a clear picture, as expected.

Like coaxial cable, using excessive couplers and splitters instead of proper-length cables and powered switches causes signal reduction. These inline devices increase cable resistance at small yet incremental levels, creating cumulative problems for the HD signal on the cables. Replace these couplers and short cables with a single high-speed HDMI cable of appropriate length to solve these issues. If the HDMI run exceeds 100 feet, consider a powered repeater operating on AC power. Ensure any HDMI switches are 1.3/1.4 revision compatible and also powered by wall current.

How to Run HDMI Cables Without Interference

Around The Home
Entertainment
By: Ken Burnside

What Happens When a HDMI Cable Goes Bad?

My Panasonic TV Is Giving Me an HDCP Error

How to Check If Ethernet Cable Is Faulty?

Around The Home
Productivity
By: Ron Price Around The Home
Entertainment
By: Michael J. Scott