How to Convert AV to HDMI

In today's world of omnipresent media consumption, new devices and technology that are designed to facilitate and streamline consumer consumption are being introduced at a dizzying pace. For those individuals who are just entering the world of media hardware for the first time, terms such as AV and HDMI may be somewhat confusing, particularly when it comes to ensuring that a device is capable of receiving the correct signal input. Fortunately, it is possible to use converter technology to convert AV signals to HDMI or other popular formats as needed. 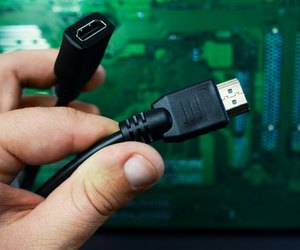 How to Convert AV to HDMI
credit: breakermaximus/iStock/GettyImages

The Basics of AV and HDMI

AV is an acronym for the relatively generic label audiovisual. AV cables are often recognizable based on their color patterns, which often include red, white and yellow connectors. An AV cable delivers the three primary elements of an audiovisual signal to the device responsible for interpreting and projecting them. These three elements include two connectors for stereo audio sound – one connector for both left and right channel audio – and a connector for a composite video signal. This particular cable design is commonly referred to as an RCA cable. The RCA acronym refers to the Radio Corporation of America, the company that introduced the RCA cable in the 1940s.

HDMI, an acronym for High-Definition Multimedia Interface, has become a de-facto industry standard for much of the media industry. HDMI connectivity allows individuals to transfer images from a device such as a computer onto a television or external monitor with little or no degradation of image quality. The first HDMI cables were introduced in 2003, and they have since undergone dramatic refinements to become the most consistent and trusted method of high-speed audio and visual data transfer.

Using the HDMI protocol, individuals can connect a diverse array of hardware, ranging from Blu-ray players to HD televisions, computers and more.

Because AV connectivity gained popularity years before HDMI technology was introduced, there may come a time when you want to connect an AV-enabled device to a monitor or other projection tool that only features HDMI connectivity. In a situation such as this, you must convert the AV signal. Fortunately, this can be accomplished relatively easily through the use of an AV-to-HDMI converter.

Converter hardware typically takes the form of a portable hardware box with AV-input and HDMI-output capabilities. By connecting your AV cables to the input section of the box, the embedded hardware converts the incoming signal so that it can be output as an HDMI-compatible signal.

These converters not only successfully transform incoming video signals but also incoming audio. With that in mind, you should be able to prepare a complete audiovisual experience in HDMI using one of these devices.

AV-to-HDMI converters are affordable. A variety of major technology retailers sell these devices at competitive prices. Individuals can expect to spend less than $50 on a high-end AV-to-HDMI converter that will provide them with excellent results for years to come.

How to Add HDMI to a Rear-projection TV

Around The Home
Entertainment
By: Gregory Scott

Can You Convert RCA to HDMI?

Around The Home
Entertainment
By: David Hicks

What Is the Difference Between a Coax Cable & an HDMI Cable in Picture Quality?

How Do I Setup HDMI for My Dynex Flat Screen TV?