What Does "Not a Valid Win32 Application" Mean? 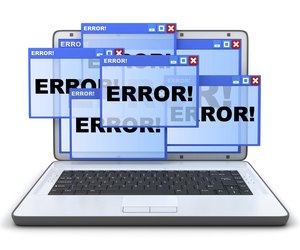 Windows may pop the "Not a Valid Win32 Application" error if you try to open a program that's corrupted. A computer may corrupt a program by accidentally altering data through hardware and software failure. Depending on what data gets damaged, file corruption can cause programs to crash and malfunction while in use or damage the program so much it can't run.

You may encounter the error if a file has the wrong extension type. For example, if a Microsoft Word document has its extension changed from .doc to .exe, the computer will think the file is a program and try to run it. The computer can't run a document like a program and will produce the error. Renaming the file with the correct extension can fix the problem.

According to Corel and Apple, Windows may encounter the invalid application error when a computer fails to complete a program download. The computer will store an incomplete file on the hard drive whenever a download is interrupted and can't complete; since it's incomplete, the file will not be able to execute. Alternatively, the file itself could fail to execute because of a malware infection. Malware is able to spread by infecting executable files on the Internet and attacking systems when the user runs the program. However, the malware can change the program so much that it fails to run and errors out.

The invalid application error will show up if you try to run 64-bit Windows programs on a 32-bit computer. Only computers that are running on 64-bit or higher processors with 64-bit operating systems can read 64-bit code. In this case, the error is not caused by malfunction, but is stating that the program is not running valid 32-bit code. The program has valid 64-bit Windows code.

You will get the "Not a Valid Win32 Application" error if you try to run a program that's designed for another operating system like Mac OS or Linux on a Windows computer. As with trying to run 64-bit code on a 32-bit computer, the error message does not imply a problem with the program itself. The program may be a valid application, but it isn't a 32-bit Windows one.

How to Fix a Not Valid Win32 Application

My Toshiba Laptop Won't Shut Down

How to Read a PFX File

How to Install a Jar File

Around The Home
Productivity
By: Joanne Mendes

How Can I Open "Octet-Stream"?