What Does RMS Stand for in Speakers?

When you're buying speakers or musical instruments, power ratings are often one of the most important things to consider. But there are many confusing and technical terms brought into the picture by manufacturers. Along with peak, max or dynamic – which are fairly straightforward to understand and mean the same thing – the "RMS" power is one of the most baffling terms you'll encounter. It means "root mean square," but how does that relate to the speaker, and how do you use the information? 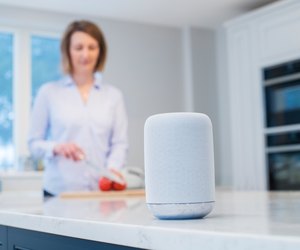 What Does RMS Stand For?

If you're wondering "what does RMS mean?" the simple answer is "root mean square." This is basically a better method of working out the average amount of power put out by the speakers than taking an "arithmetic mean." This is simply adding up multiple readings for the power output from the speaker and dividing the result by the number of readings you took. The root mean square is a little different. Instead, the squares of each reading (the readings multiplied by themselves) are added together, and then divided by the number of readings. To get to the RMS power, you take the square root of this result.

The RMS value will generally differ from the arithmetic mean, but it's a more accurate description of the power output of the speakers.

Manufacturers can't quote a simpler number for the power output of a speaker because it varies throughout a piece of music. There may be quiet sections – requiring less power – and louder or more bass-heavy sections which require more power. So you can't take the power output at any point, you have to take an average of the output at several points. The RMS rating is the most accurate way to do this. But different companies compute this in different ways, so it can still be difficult to compare results between companies reliably. However, if the product is CEA certified, it will have been tested using standardized methods, which allows you to compare ratings directly.

Often, when companies are trying to sell speakers, they prominently include peak, max or dynamic power ratings on the marketing materials. These all mean the same thing: the power output at the loudest or most power-intensive note in a song. This isn't completely useless, but the RMS power rating tells you a lot more about what the speaker can consistently put out. The peak rating can be many times higher than the RMS power, but it's misleading as a measure of what you can expect from the speaker throughout a piece of music.

Now that you have the answer to "what does RMS stand for?" you can compare speakers much more accurately. Look for the RMS power of the speakers you're considering and compare them if both products are CEA certified. Comparing between manufacturers without certification is still better than focusing on peak power ratings, but with certification you know the comparison is a fair one. You can also look at the peak power ratings (because this is still useful information), while still mainly focusing on the RMS ratings.

How to Calculate Speaker Wattage

How to Match the Speaker Watt to the Amp Power

Around The Home
Entertainment
By: Ian Kenney

Around The Home
Entertainment
By: Robert Godard

How to Make a Stereo Speaker Louder

Around The Home
Entertainment
By: James T Wood