What Is a Projector?

In today's tech-saturated climate, it's easy to overlook some of the more traditional tech hardware that's firmly embedded in our society. Although items such as computer keyboards and dishwashers may be less exciting to explore than the latest smart phone offering, these devices are filled with sophisticated hardware nonetheless. The projector is another example of a tech device making significant contributions to the world while remaining on the fringe of trendy appeal, so understanding projector function and the technology making it happen can be – well – illuminating. 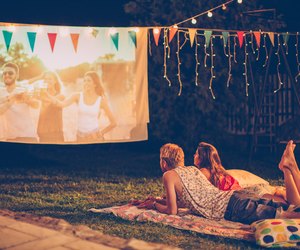 If "What is a projector?" has ever crossed your mind, you may be surprised at the complex answer – complex because the modern projector accomplishes its primary goal of displaying and focusing light using a variety of methods. The earliest projectors date back to the first half of the 20th century, when European scholars explored how micros and lenses could be used to harness light. By 1736, available technology allowed magnified images to be projected onto walls or other surfaces using natural light as a source of illumination.

The opaque projector, which substituted natural light for a lamp, was first introduced around the year 1756. This device, and the various evolutions of it which occurred over the next two centuries, became the de facto projection method for many popular institutions, such as cinemas.

Beginning in the 1950s, a series of new projectors were developed, greatly expanding the functionality of these devices. The overhead projector and slide projector were two of the most popular projection tools to emerge during this period. Today, projectors can convert digital files into projectable content using a combination of hardware and software. Nevertheless, the idea of harnessing a light source to project an image hasn't changed even though the means of creating the light have. Modern projectors can utilize a variety of sophisticated light sources to create a level of brightness and clarity in images and film previously unachievable through such devices.

Perhaps more exciting is that modern projectors have gone through size reduction that easily allows purchasing and use by consumers. It would have been unthinkable 80 years ago that film projectors would ever have been found in homes.

Today, LCD portable projectors are found in homes and apartments around the world. This technology is not only incredibly powerful, but also affordable. If you're interested in purchasing a projector, you can simply visit your nearest electronics store to browse a variety of options. If only the early Europeans experimenting with light, shadow and reflection could see the fruits of their labor today!

How to Make a Projector Bigger

The Advantages of Overhead Projectors

What Is Difference Between a Beamer & a Multimedia Projector?

Around The Home
Entertainment
By: Sarah Clark