What Is a Video Controller?

A video controller, or video card and graphics card as they are now more commonly known, is an expansion card whose function is to generate and output images to a display. When referring to early machines, the card is sometimes referred to as a video controller or graphics controller, when the cards were typically integrated onto the motherboard itself. 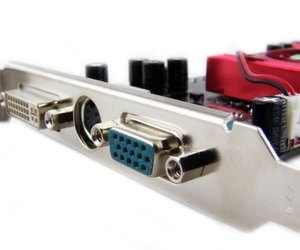 Purpose of a Video Card

Think about this scenario for a moment: You are asking a local resident directions to a hotel. You cannot understand anything this person is telling you no matter how hard you listen. Luckily, someone who speaks their language and yours approaches the person and begins translating for the both of you. After a few exchanges of dialogue, you are able to obtain the directions and make your way to the hotel. A video card works in the exact same way. Without it, a picture would never appear on our computer monitors and we would constantly be viewing a blank screen, making the computer completely useless.

You probably, to some degree, understand the basics of a motherboard. You probably know that it is the brain of a computer, and that it houses the processor and memory. A graphics card has the same qualities. Much like a motherboard has a CPU, a graphics card has a GPU (graphics processing unit). The GPU behaves much like a CPU in that it is designed specifically for drawing displays, and is responsible for performing complex mathematical and geometric calculations that must be processed for graphics rendering. Much like a CPU is the heart of a computer, the GPU is the heart of the graphics card.

How a GPU Works

As stated, the GPU is the heart of the video card and is the component that does the actual work. To better understand how a video card works, you must realize how the GPU works. The GPU uses special programming created for the video card to analyze and use data that is used to create images for display onto the monitor. Once the GPU creates the image, it stores the information it has created into the video card's RAM for later use.

Tying it All Together

As stated, a video card is basically a graphical translator for the computer. As a whole, the graphics we view on our monitors daily are nothing more than pieces of binary data. From the state-of-the-art graphics we see in our computer games to the icons on our desktop, every pixel that makes up what we see is nothing more than a series of numbers translated into graphics thanks to the video card.

What Does a Computer Graphics Card Do?

Around The Home
Productivity
By: Shanika Chapman

Symptoms of a Graphics Card Failure A Podcast for Self-Proclaimed Food Nerds

Around The Home
Productivity
By: Sam Fitz