What Is Digital Coding?

Digital coding is the process of using binary digits to represent letters, characters and other symbols in a digital format. There are several types of digital codes widely used today, but they use the same principle of combining binary numbers to represent a character. 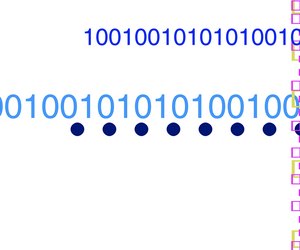 You might not see it, but digital coding is everywhere.

Computers and electronic devices need a systematic and precise algorithm to read information. This system requires that each character, letter or symbol is unique and easily distinguishable from other characters. To do this, digital coding is required. In digital coding, letters or symbols are represented by specific sets of binary numbers or characters. For example, the numbers 01000001 represent the character "A" in a binary code. Binary code, although not a specific digital coding technique, offers the simplest explanation to understand digital coding.

As the term suggests, digital coding turns information into digits easily recognizable by computers and other electronic devices. These digits are sets of information divided into very small pieces known as bits. A bit -- short for binary digit -- is the smallest measurement assigned. The most common digital coding techniques use around 8 to 16 bits per character. This means that each character has at least eight alphanumeric symbols set in a distinct progression.

There are several types of digital codes used in computers today, but three of the most widely used are the American Standard Code Information Interchange, Extended Binary Coded Decimal Interchange Code and Unicode. ASCII contains about 128 different codes that represent the American letters, symbols and numbers. For example, the letter "M" is represented in ASCII as "077" in digital code. EBCDIC and Unicode use the same coding process, but they assign a different set of symbols for each character.

The most common practice in creating digital codes uses alphanumeric characters. Alphanumeric coding combines letters and numbers to create a specific representation of a character in a computer program. For example, the code "U+0041," which represents "A" in Unicode, has letters, numbers and the "+" symbol.

How to Type a Triangle Character on the PC Keyboard

How to Convert Text to ANSI Format

How to Insert Symbols Above Letters With the Keyboard

How Do I Convert Letters to Binary?