What Is PCM Audio?

Pulse Code Modulation audio is a digital recording of analog audio used in a range of technologies from telephones to Blu-ray discs. PCM works by taking analog signal amplitude samples at regular intervals several thousand times per second. Recording software initially uses the PCM format before converting audio into another format like MP3 or AAC. Additionally, compressed audio files like MP3s are decompressed back into PCM when being played back on speakers. 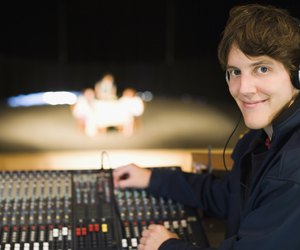 PCM audio recordings are raw digital audio samples. High quality PCM recordings can be lossless because they don't discriminate between recorded content and don't use any form of compression to cut out unnecessary and less important audio content to reduce file size. Two factors gauge PCM's performance: the sampling rate and wordlength. PCM samples the audio waveform between 8 and 192 thousand times per second. The wordlength measures the signal-to-noise ratio or available bandwidth in 8 to 24 bits. PCM also supports mono, stereo and multi-channel recordings for sending different feeds to different speakers. The WAV, AIFF and AU recording file types contain the unprocessed PCM data.

The History of PCM

PCM traces its origin back to 1937; Alec Reeves, a British Engineer, developed the technology. Telephone companies started using the technology in the 1960s to send phone calls long distances between cities more efficiently. While PCM files are much larger than compressed audio like MP3 files, the format uses less bandwidth than analog audio. Telecoms commonly use Mu-Law, a PCM telephony technology, to send audio in 64 Kbps PCM data streams. Different video and audio recording formats since the 1960s have regularly used or included PCM as an audio recording option.

Devices That Use PCM

Devices like audio/video equipment and computers have widely adopted the PCM format. The PCM technology makes an appearance in recording formats like 8mm, Hi8, VHS, S-VHS, audio CDs, DVD video and Blu-ray video. Computer sound cards use the PCM format for recording audio from the microphone jack and can convert compressed audio into PCM for playback. TV sets and audio/video equipment often sport PCM-labeled ports for sending uncompressed audio from the playback device to the TV or receiver.

Modern telephones can use Pulse Density Modulation instead of PCM to move audio from the microphone to the signal processor. PCM is easier to manipulate, but PDM benefits from picking up less noise and interference from other signals at a low cost. In the audio/video world, PCM competes against encoded formats including Dolby Digital, TrueHD, DTS and DTS-HD. It's common for audio/video technology to support more than one playback format. Sony's Super Audio CD technology uses a different recording technique called "Direct Stream Digital" which only records if the audio wave is moving up or down at sample points, rather than PCM's range of values.

What Is SPDIF Output?

How to Reduce MP3 File Size in Audacity

How to Record From Reel to Reel to CD

Around The Home
Entertainment
By: Shawn M. Tomlinson

How to Change Audio Sampling Rate on a Zoom H4n

Around The Home
Entertainment
By: Jason Savage

How to Make 8-Bit Sounds With Audacity

Around The Home
Productivity
By: JC Torpey