What Is the Role of a Processor?

You might have heard the explanation that a computer's processor is like its brain. As this analogy implies, the central processing unit takes care of a computer's "thoughts," receiving inputs and processing data to generate results. Unlike a brain, a CPU is not the primary storage space for long-term or short-term memory, tasks relegated to the hard drive and RAM, respectively. CPUs and brains also differ fundamentally in their integration: You can replace a CPU with no need for Dr. Frankenstein. 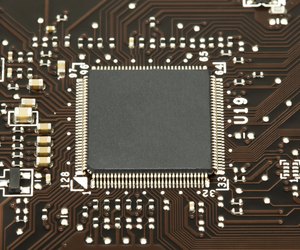 Close-up of a CPU chip on a computer motherboard
credit: RAW_group/iStock/Getty Images

Uses of the Processor

A CPU computes data during almost every action you perform on your computer. When you open the calculator and add "2 + 2," the CPU determines the answer "4." When you play a strategy game such as "Civilization," the CPU plans out the moves of every AI opponent using the game's programming. No matter how complex the task, these actions break down into basic instructions understood by any PC's CPU, regardless of brand or model. Mobile device processors, on the other hand, have different instruction sets and require differently programmed software.

Connection to Other Components

Inside a computer, a CPU connects directly to the motherboard through a CPU socket. The type of socket varies by motherboard, imposing a limitation on which CPUs work with each board -- a vital specification to check when considering an upgrade. Alongside the CPU are the hard drive, RAM and various expansion cards. These components all work together to produce results. The CPU relies on data stored in the RAM's active memory and outputs results to files on the hard drive. Expansion cards include extra components that offload work from other parts, such as video RAM and a graphics processing unit on a video card.

CPU statistics include two measurements: clock speed, measured in gigahertz, and the number of cores. Together, these stats give a rough estimation of speed. The number of cores affects how well a processor can handle multiple tasks at the same time. A CPU with a single core can perform only one task at a time -- it might seem like it can multitask, but it actually switches back and forth between tasks, offering worse performance than a multicore CPU. Some programs can split work between cores, offering a speed boost on multicore CPUs even when not multitasking.

A processor's clock speed is sometimes referred to simply as "speed," but this description falsely implies that a higher rating universally produces a faster processor. To visualize how clock speed relates to actual speed, imagine two bicycles, one with large wheels and another with small wheels. If both bikes turned their wheels at the same number of rotations per minute, the bike with larger wheels would travel at a faster rate. Newer processors have "larger wheels" due to technological improvements, such as the ever-increasing number of transistors predicted by Moore's Law. In general, comparing clock speeds only helps when comparing CPUs of the same brand released within a year or two of one another.

How Is the CPU Speed Measured?

Around The Home
Productivity
By: Adam Parker

How to Tell If My CPU Is Hyper-Threading?